Doesn't a quantum algorithm being deterministic contradict the superposition principle?

How can the EQP quantum complexity class exist? I mean, doesn't the superposition principle imply it is not possible to know with probability 1 whether a quantum algorithm will return a solution?

For if a quantum computer’s state is in superposition, quantum measurement implies the state we obtain when we read the computer's state is random - with the probabilty we will obtain any particular state being based on its probability amplitude at the time of measurement. Thus unless some state has probability amplitude 1 (which would mean the system wasn't in superposition, so can't have been a quantum algorithm, as any quantum algorithm must use superposition), we cannot know whether we will obtain a solution state at any quantum computation's completion.

One way to understand why some deterministic quantum algorithms use superposition is to see that an algorithm is a map from input vectors to output vectors. A good algorithm goes from the input vector to the output vector via the shortest path. The only steps that it can take are elementary gates (Hadamard, CNOT, X, Y, Z, etc.). Sometimes, the shortest path happens to be one in which the intermediate states are in a superposition, even if the final state is not. If this is the case, if all shortest paths involve superposition, then this problem is solvable more quickly by a quantum computer than by a classical computer, which cannot take those paths.

This is a bit like asking "doesn't the ability to rotate objects prevent me from ever getting them right-side-up again?".

A physical experiment that nicely demonstrates this principle is the Mach–Zehnder interferometer. Beam splitters create superpositions of paths, but they can also put them back together: 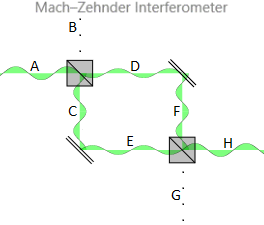 Not the answer you're looking for? Browse other questions tagged complexity-theory quantum-computing probabilistic-algorithms or ask your own question.

3
Hadamard gate on entangled qubit
2
How is Grover's Algorithm useful?
1
Applying a 1-qubit gate to entangled qubits
1
What does it mean for a problem to be solved in polynomial time "relative to" an oracle?
1
Can quantum computer compute the minimal intersection DFA of numerous minimal DFAs in polynomial time using polynomial number of qubits?
1
How are Qubits useful?
7
Is it possible to construct a C^5(U) with V^2=U and no work qubits (Nielsen & Chuang Exercise 4.28)
3
Shor's algorithm and offset elimination
2
Can quantum computers really compute a vast number of possible solutions simultaneously?