When does a PDA halt?

In DFA/NFA the automaton halts when it finishes reading the string.

In a PDA there's the string and the stack. When the string is finished and there are symbols on the stack does it ignore them? Or does it have to pop them?

Or maybe does the behavior depend on whether the PDA is deterministic or not?

Here's an example to demonstrate where the ambiguity is.

It's a dumb example and it can be done with a DFA but just for demonstration. 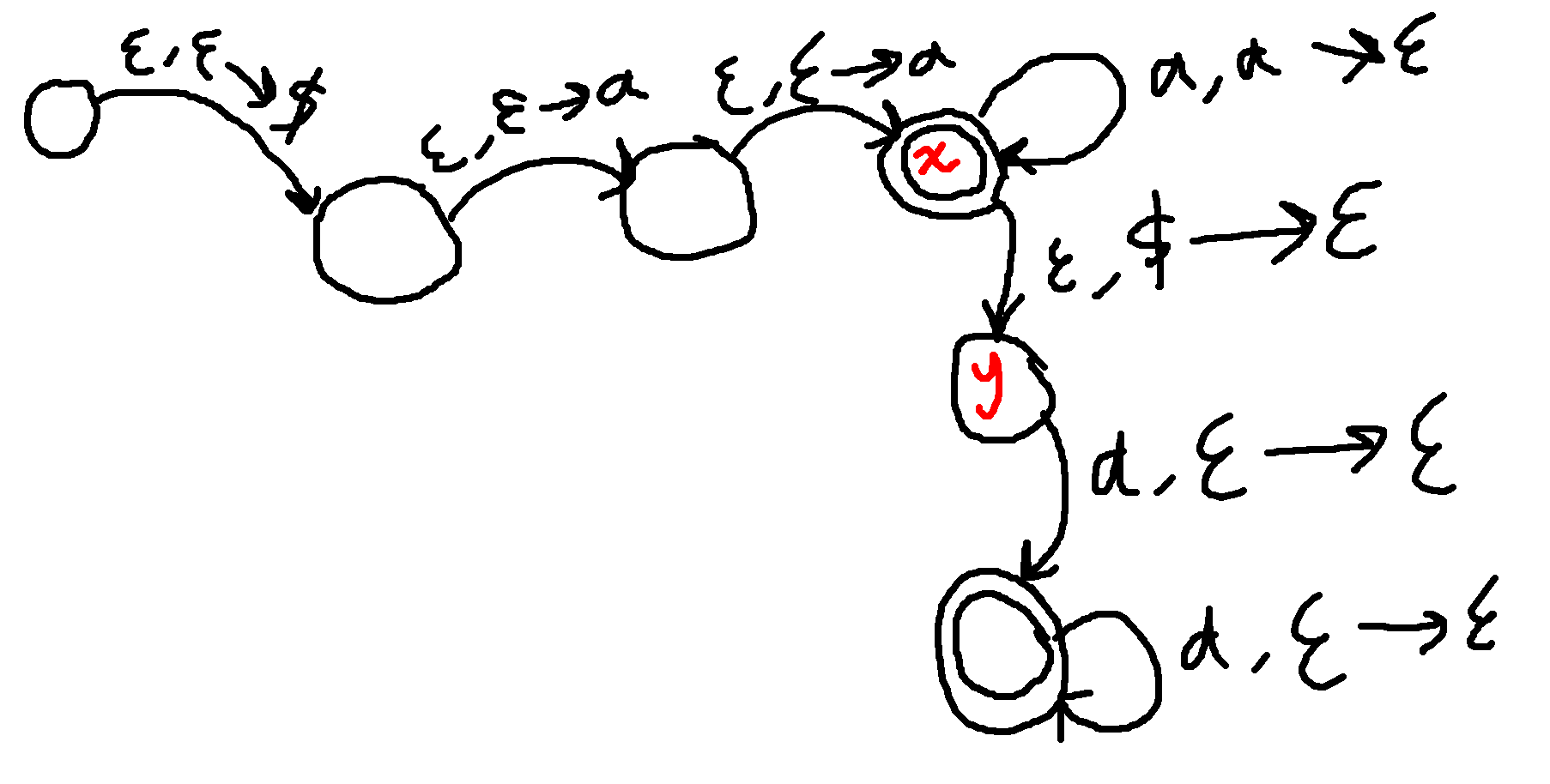 This PDA should accept anything but the string aa.

It starts by inserting a $ to mark the bottom of the stack. Then it inserts 2 as. Then when it receives an a it pops one from a stack. It can do that twice.

Now at this point suppose that the input string was indeed aa, and that the machine reached state x and popped the two as. Now the stack has only $ in it.

If the latter is true then this is a wrong PDA for this language. It would accept everything.

The setup places $aa\$$ on the stack and puts the machine in state $x$. We then have this sequence of moves on input $aa$:

Notice that there's no nondeterminism here: perhaps you were mistaken in your first bullet point: indeed there is a $\$$ in the stack at move (1), but it's not on the top of the stack.

Indeed, with $\epsilon$-moves there is some problem with acceptance for PDA even when they are deterministic.

To be precise, "halting" is not required, only the possibility of reaching the acceptance condition. Whatever is possible later does not count. In some 'theoretical' constructions this might be a problem: even for deterministic machines we cannot check the first state entered after reading the input. In fact the computation might accept when at the same time it is possible to run off in an infinite run of $\epsilon$-moves.

1
Difference between DPDA and NPDA?

4
Find a pushdown automaton for { x#y ∣ x ≠ y }
2
Converting final state PDA to empty stack PDA
3
When does a PDA split?
3
Does a PDA follow a transition if the top stack symbol doesn't match?
1
Understanding PDA and Equivalence of PDA and CFG
1
Are there strings which get accepted only by PDA by empty stack and not by PDA by final state, and vice versa?
0
The same transition twice in Pushdown automata (PDA)
1
How does Sipser's 0n1n PDA reject 0101?
1
Designing a PDA without using CFG -> PDA for the language $ \{ a^nb^m | n \le m \le 2n \}$