How to draw a Turing Machine for Even-Even

Modified algorithm: To avoid the problem of crashing on the way down the $Tape$, change the letter in the first cell to an $X$ (if it's an $a$) and to a $Y$ (if it's a $b$). This way we can recognize the left end of the tape.

So far I have this but am not sure how to implement the modified algorithm (note: the e's from start to halt mean empty): 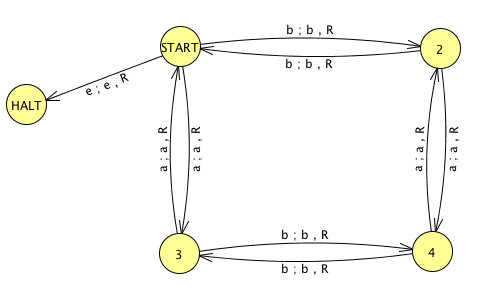 Any help is appreciated!

From what I understand, your first algorithm intends to process the $a$ and $b$ inputs separately, which doesn't seem necessary. Your difficulty seems to come from formalizing a TM, which you can do in a couple ways.

Direct Conversion (Courtesy of Raphael in the comments)

You can view an NFA as TM that can not write and move only to the right. In other words, you don't have to do anything at all for the conversion, just add $R$ to transitions that consume a symbol and $N$ to $ε$-transitions, and then you basically have your equivalent TM.

Multitape Approach - Suppose we know that a multitape TM is equivalent to a TM, so we can have two tapes:

As we proceed through the input, we update the computation tape accordingly: if we read an $a$, and we're in state $1$, we swtich to state $3$, etc. To reduce this back to one tape, we need another symbol $\#$ to separate tapes, perhaps $\hat{a},\hat{b}$ to designate the location of the heads and pre/append our computation tape (for which we only need two characters of space).

I ended up figuring it out, thanks all for the help. 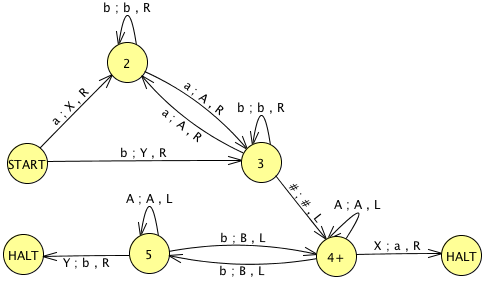 10
The space complexity of recognising Watson-Crick palindromes
1
How to distinguish empty cells from cells outside of the input cells?
2
counting binary, with moving position (turing machine)
4
Construct a Turing Machine that recognizes the set $\{0^{2n}1^n|n\geq 0\}$
3
Reducing randomness needed by turing machine
4
How would you create a Turing machine that copies a string and prints it to the tape?