I have found in a book the example of how to make a FA that accepts those numbers that are divisible by 3, that means that n mod 3=0. In the example the author used the binary representation of the number to be evaluated. The resulting automata is: 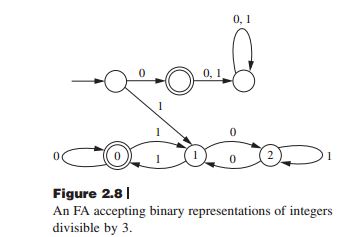 The states represent the probable remainders, that could be 0, 1 or 2. Some additional explanation is in the following part:

I have tried the following examples to test this automata:

I just do not have a clear picture of how to test this FA for example with an input of 81 mod 3, does it make partial divisions? When I try to follow it I end up in an acceptance state even before finishing to evaluate the remainder.

I believe you are misunderstanding the way finite automata work. A finite automaton accepts a language, i.e. a subset of the finite strings of a given finite alphabet. In your case, the accepted language is the set of strings made of $0$ and $1$ which encode a well-formed multiple of $3$.

Given a string, imagine placing a token on the initial state, then for each character of the string, left to right, move the token along the transition labelled $0$ or $1$, according to which character you read.

After having consumed each character of the string, the automaton accepts if and only if the token is on one of the accepting states.

Considering your automaton, intuitively, the top three states determine whether the string encodes a well-formed number (i.e. a string that starts with $1$ or is exactly $0$, for instance, $1000$ is valid, but $000$ isn't) while the bottom three determine whether or not it is divisible by $3$ using elementary number theory.

14
Algorithms computing if a number is a multiple of 3

2
Simplification of regular expression and conversion into finite automata
1
Finite State Automata for recognising consecutive characters
14
The number of different regular languages
1
Deciding if a finite automata accepts strings of any length
1
Deterministic finite automata that accepts the only the string “aabb”
3
timed automata - advance only in certain states
0
How does modulus affect the regularity of language?