A binary tree is a tree data structure in which each node has at most two children, which are referred to as the left child and the right child. 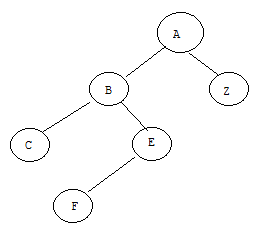 In binary trees, a new node before insert has to specify 1) whose child it is going to be 2) mention whether new node goes as left/right child. For example(below image),

To add a new node to leaf node, a new node should also mention whether new node goes as left/right child.

For deletion, only certain nodes in a binary tree can be removed unambiguously.

In a binary tree, a node with two children cannot be deleted unambiguously.

Is this understanding correct ?

Its hard to say without the knowledge of why a node goes to the left or right of another, and if this carries as a property throughout the tree. If by ambiguously you mean there is more then one valid way of replacing the node and the tree has an ordering structure (such as a binary search tree) then your understanding is correct. The deleted verticie can be replaced with either its in order predecessor, or its in order successor. Both of these will be valid with the ordering property.

Not the answer you're looking for? Browse other questions tagged data-structures binary-trees or ask your own question.

3
Represent an octree as a binary tree of thrice the depth?
0
Binary tree algorithm asymptotic analysis problem
2
Why isnt node checked for nil value in start when transplanting binary tree
6
Why is this not a valid Red-Black tree?
0
Is "promoting a key" a part of deleting internal node key in B+ Tree?
5
What are these tree transformations called?
1
Delete a node with 2 children in a binary search tree
1
check if a binary tree is a binary search tree
0
Depth of binary tree with few single children