To explain that the product of two DFAs $A$ and $B$ could lead to a result of size $O(|A|.|B|)$ in the worst case, most examples make use of DFAs containing cycles (those cycles are responsible in creating |A| copies of B in the result) like in this example : 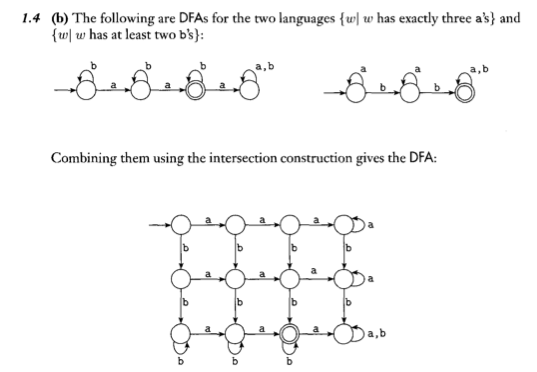 As they are much more simpler than standard DFAs, I am wondering if the product operation (and more specifically union/intersection operations) of two acyclic DFAs $A$ and $B$ could result in a DFA of size $O(|A| + |B|)$ in the worst case ?

According to the article "State Complexity of Union and Intersection of Finite Languages" here : http://toc.yonsei.ac.kr/~emmous/papers/dlt07.pdf the authors say that the size of the DFA resulting from the product of two acyclic DFAs $A$ and $B$ remains in $O(|A|.|B|)$ only if the alphabet used is of variable size that depends on the size of the input DFAs. Thus, they conclude that this upper bound is $unreachable$ if the alphabet is of fixed size.

I would appreciate any counter-example, proof or reference to a paper dealing with this problem.

Lemma 4 and Lemma 8 in your paper show that even for a fixed size alphabet, there are infinitely many finite languages with minimal DFAs $A,B$ of sizes tending to infinity such that the minimal DFAs for the intersection and union languages has $\Omega(\min(|A|,|B|)^2)$ states.

Not the answer you're looking for? Browse other questions tagged regular-languages automata finite-automata or ask your own question.

8
Is this intersection of DFAs correct?
18
Exponential separation between NFAs and DFAs in the presence of unions
5
Testing two DFAs generate the same language by trying all strings upto a certain length
4
Is O(|A| + |B|) the size of the union of two synchronized DFAs A and B?
3
Is $2^{1+\sqrt{mn}}$ an upper bound for the size of the DFA resulting from the determinisation of n DFAs of size m
1
Upper bound for the union of $n$ DFAs of size at most $m$?
1
Can quantum computer compute the minimal intersection DFA of numerous minimal DFAs in polynomial time using polynomial number of qubits?
3
Are DFAs with a unary alphabet strictly less powerful than DFAs with a binary alphabet?
3
Finding the union, subtraction, and intersection of two DFAs
2
How many different languages over the unary alphabet {a} are recognized by 2-state DFAs?