What's the input to the decoder in a sequence to sequence autoencoder?

What's the input to the decoder part of a sequence to sequence autoencoder? I've seen certain examples of such an autoencoder (using LSTM's more often than not) but am still unclear.

I was wondering the same and just stumbled across a nice tutorial by Quoc V. Le. The following explanation deals with the conditional case since this seems to be the common case. My explanation is based on and the image is taken from chapter 5 Sequence output prediction with Recurrent Neural Networks.

We only regard a decoder with a single cell RNN which has: 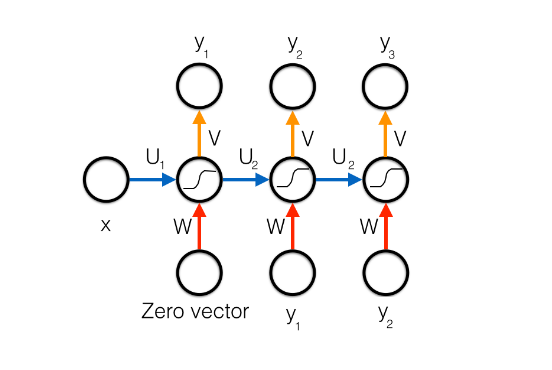 Since we are doing sequence prediction, we are not only interested in the last output of the RNN but rather the output at every timestep. Therefore the conditional decoder is designed to predict each label based on the previous ones, mathematically it splits the conditional probability in the following way:

Like often done in machine learning, you can transform the probability to a score/energy/whatever which consists of a more convenient summation:

The maximization of that score over our data is the objective. That can be equivalently formulated by the minimization of $ - \sum_{(x,y) \in D} \log p(y|x) $ where $D$ is our training set.

To complete this thought: When this probability is approximated we are actually interested in the argument $\theta_{min}$ of the minimization of $ - \sum_{(x,y) \in D} \log f(y|x,\theta) $ where $f(y|x,\theta)$ is our function approximator, e.g. a RNN, and $\theta$ the vector containing all weights $U$, $W$ and $V$.

During training we have the ground truth at hand so we can feed the decoder (see image) with the respective previous label at each timestep. At the first timestep we use the output of the encoder. Easy peasy.

Here we obviously do not have the ground truth so instead we use the output of the previous timestep. This however poses another problem, since to find the sequence of maximum probability, we would have to compute every possible sequence and its probability according to probability function defined above.

Now, apparently one "greedy" approach is, to just ignore the above probability model and take the argmax's of each timestep.

Another more faithful approach is Beam Search which just heuristically looks at a subset of probable sequences and picks the one with maximum probability of them.

I'd say based on the above explanation and the paper you referenced, that the unconditioned case does only get input at the first timestep of the decoder and then just "works with" the propagation of the hidden states. So the second equation of the RNN equations changes to $h_t = \sigma ( U h_{t-1} )$.

Then the outputs at each step would not be conditioned on the previous timestep's output, but rather be unconditioned. This way the modelled probability would become

and the greedy inference strategy would become valid.

Not the answer you're looking for? Browse other questions tagged machine-learning artificial-intelligence neural-networks or ask your own question.

9
Intuitive description for training of LSTM (with forget gate/peephole)?
2
Neural network: noisy temporal sequence converter (transducer?producer?) on demand?
1
backpropagation algorithm seems to be forcing output values to middle than extremes
2
How is adversarial autoencoder better than an ordinary autoencoder?
0
How can I represent a set of graphs for learning purposes?
0
Confused on Variational AutoEncoder