Is this in-place merge algorithm efficient or not?

I have trouble analyzing the characteristics of this algorithm that merges two adjacent sorted lists. Basically it looks at some number of the tail of the first list, and the same number of head elements of the second list, swaps them, and recurses on the four sublists. Code for the algorithm: 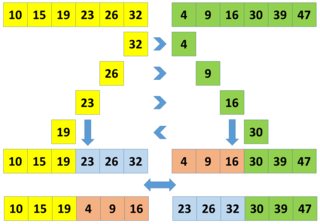 An actual implementation can be found here.

So far I was able to establish these points:

My questions are as follows:

This algorithm has been previously published in literature; for a detailed worst-case runtime analysis, see [1], [2], and [3]. It is referred to as "Symmerge" or "merging by decomposition". When the two subarrays to be merged are both of length $n$, the algorithm runs in worst-case $O(n \log n)$-time and uses $O(\log n)$ space (due to recursion).

If we use this algorithm for mergesort, the overall mergesort recurrence becomes $T(n)=2T(n/2)+O(n\log n)$; using the Extended master theorem, we know $T(n)=O(n \log^2 n)$.

Not the answer you're looking for? Browse other questions tagged algorithms time-complexity sorting space-complexity mergesort or ask your own question.

1
Is this a divide-and-conquer algorithm?
16
Heap - Give an $O(n \lg k)$ time algorithm to merge $k$ sorted lists into one sorted list
7
Why is Quicksort described as "in-place" if the sublists take up quite a bit of memory? Surely only something like bubble sort is in-place?
3
How many comparisons in the worst case, does it take to merge 3 sorted lists of size n/3?
0
Which sort algorithm to choose given two specific arrays?
1
Worst case running time of lexicographical sorting of a list of n strings each of length n using merge sort
0
Insertion sort on small arrays in Merge Sort