RAM can be accessed hundreds of times faster than a hard drive. Explain How?

Please guide me on this topic.

Wikipedia has great information on this topic, but as a brief, simplified explanation, know that it boils down mainly to the involvement of mechanical moving parts in a traditional Hard Disk Drive (HDD).

The size of the addressing space in itself doesn't affect the access times. Otherwise you could theoretically build a very small hard-disk drive with only 4GB and expect it to run just as fast as your RAM chip. In reality that is not possible.

All the data is read and written by the read and write heads, laying on the round disks that physically store all the data. Whenever data in a specific address is specified, the heads must move to the correct track (the time it takes is the Seek Time) and the disk must rotate until the requested sector is under the head (Rotational Latency). The time until both of these tasks are completed is the Access Time, and only then the data transfer can actually start. 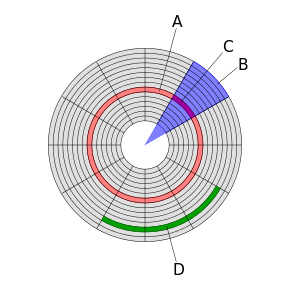 In contrast, RAM cards have no such mechanical moving parts and therefore the time constraints are much lower. They are mainly there to allow proper synchronization of the electronic components that comprise the memory card and ensure that it works reliably.

You probably also heard of the term Solid State Drive (SSD). Seagate recently manufactured such a drive with 60TB capacity, and its access times are still much shorter than those of hard-disk drives. How? Like RAM chips, they have no moving parts.

RAM is a matrix memory, which is made of capacitors. The matrix is an array of transverse lines (rows) and vertical lines (columns). A capacitor can't be charged if its row terminal isn't grounded and its column terminal doesn't have voltage, the voltage can just exist if it can flow from high voltage to ground. So an IC would scan the columns and rows to charge the capacitors, that process can be done very fast without any mechanical movement. In contrast, hard drives use motors to control the reader arm and rotate the disk, so can't be as fast as RAM.

Not the answer you're looking for? Browse other questions tagged computer-architecture memory-access or ask your own question.

3
How can a CPU access more memory locations than 2^wordsize?
19
How can I academically say that 'one computer is slower than the other'?
2
How does a hard drive knows what bit is the beginning of of a byte/word?
0
How can a operating system run on more than one CPU architecture?
0
how one memory can be accessed simultaneously in instruction fetch and data read?
0
Can you explain in terms of logic gates how Babbage’s Analytical Engine worked?
2
How earliest that the data TLB (Translation Lookaside Buffer) can be accessed in an instruction execution pipeline?
2
How memory controller reads from RAM with O(1) time complexity?