Measuring and maintaining the diversity of individuals in Genetic Algorithm

While I was using the Genetic Algorithm to generate full correct Sudoku grids starting from a population of random grids, I occasionally face the problem of the process being stuck on a local maxima until the population loses its diversity.

So, I decided to find a mechanism for maintaining the diversity of the population to avoid the problem. What I thought about was:

I faced two problem with this approach:

How to rank the individuals of a population based on both diversity and fitness?

You can combine diversity and fitness into a single score: $$score(i) = fitness(i) + k \cdot diversity(i)$$

It's a standard approach and doesn't require significant changes to the algorithm. Unfortunately $k$ is problem-specific.

This needs a lot of changes (e.g. the algorithm now needs to maintain a set of Pareto optimal individuals).

MOEA is probably a overkill for what you're doing. Indeed it's very interesting and a good training.

The genotypic / structural approach to diversity isn't the only workable one.

A great advantage is the ease of computation: often an acceptable approximation is the simple fitness value. 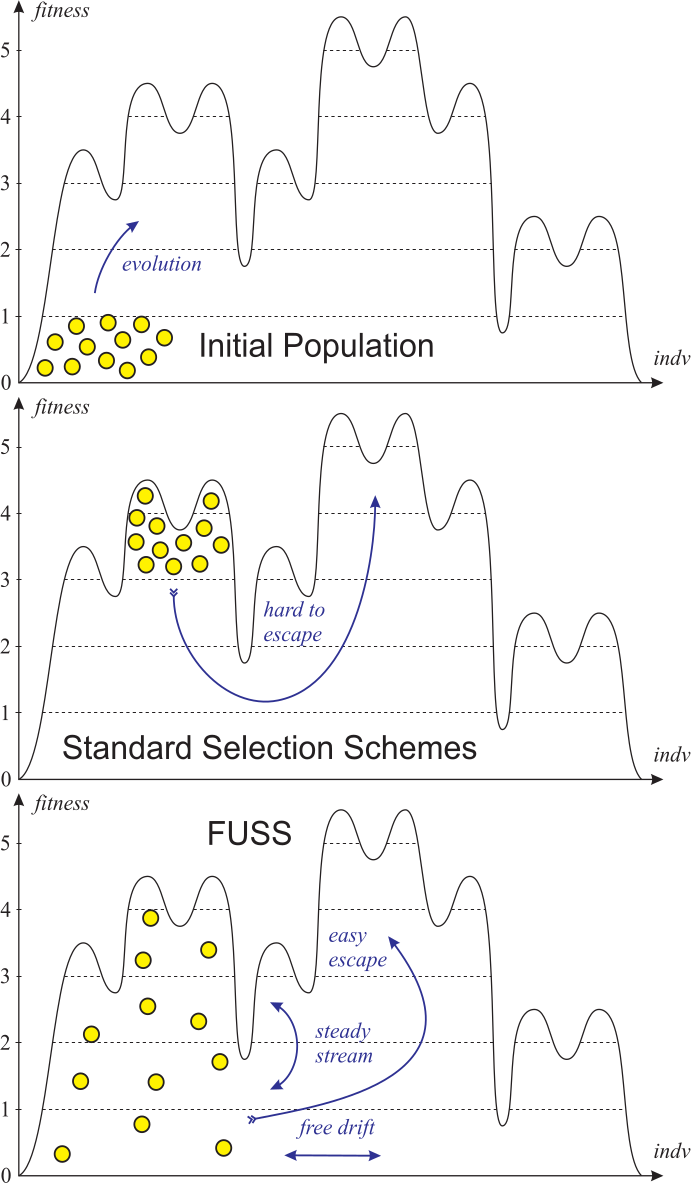 Evolution of the population under FUSS versus standard selection schemes (STD): STD may get stuck in a local optimum if all unfit individuals were eliminated too quickly. In FUSS, all fitness levels remain occupied with “free” drift within and in-between fitness levels, from which new mutants are steadily created, occasionally leading to further evolution in a more promising direction (from "Fitness Uniform Optimization" - Marcus Hutter & Shane Legg).

One approach is to use this variant of @manlio's formula $$\mathrm{score}(i) = \mathrm{fitness}(i) + k(g)\, \mathrm{diversity}(i)\,,$$ where now instead of a scaling constant $k$ we apply a scaling function $(g)$ that decreases with increasing generation number $g$. The idea is that initially $k(g)$ is high, keeping diversity up, but drops with time as the population becomes more and more likely to have generated a point in the vicinity of the global peak, allowing convergence to that peak.

Of course, like all suggestions, this one comes with no guarantees.

Not the answer you're looking for? Browse other questions tagged genetic-algorithms evolutionary-computing or ask your own question.