I'm learning the Ant Colony Optimization Algorithm and I would like to apply it to a variation of the TSP problem (find the path that start from a node, crosses all nodes and finish in the initial node) where you can cross a node or edge more than once. Actually, my problem wouldn't have solution for the TSP because some nodes only have one edge.

This is a very simple example, where red edges mean that the cost is 1 and blue that is very big, for example 20. As you can see for the best path you need to repeat edges. 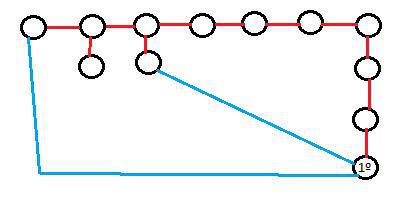 I want to add that my particular problem has around 1000 nodes and 2000 edges.

I have some new ideas. First of all it looks like I must have a way to find the distance and the path between cities, so that each ant can decide which is the next city to go. The main option is the Johnson's Algorithm which offers good performance for this sparse graph.

To store all the possible paths I could use a triangular matrix where each element is a vector of nodes. If we suppose that the mean of the paths is 50 nodes (represented with 2 bytes integers) the memory needed would be around (N: nº nodes) N*N/2*50*2 bytes so more or less 50Mb.

The other option is to have the same structure but in each element of the matrix I would have only one node, and to find the path I would have to access the position of that node and so on until I find the one I'm looking for. Because if the shortest path from node A to node C crosses B, the path is the shortest path from A to B joined with the one from B to C. This option need N*N/2*2 bytes more or less 1Mb. But it will probably have worse performance because it needs much more access to memory and I doesn't take advantage of space locality so it will have many cache misses.

About ACO, maybe I can use an algorithm like Minimun Spanning Tree or something like that to put some extra initial pheromones, but I'm not sure if that will be positive.

8
How does the 3-opt algorithm for TSP work?
8
Minimum distance between start and end by going through must visit points in a maze
0
Ant colony optimization algorithm
1
Find a path that contains specific nodes without back and forward edges
0
Find longest path in graph with N nodes and N edges
1
How to get initial flow for TSP with missing edges
0
Which of the following statements are true for the given special cases of the Traveling Salesman Problem?