Why is it that any graph traversal method can be described as pre-order, in-order, or post-order? What do those terms mean?

There are several graph traversal algorithms in computer science ( vis. depth first, breadth first, etc. ). Furthermore, each of these algorithms can be implemented in pre-order, in-order, and post-order.

What do those terms mean? How do I properly categorize an algorithm as pre-order, in-order, or post-order?

Take a binary tree with the following structure: 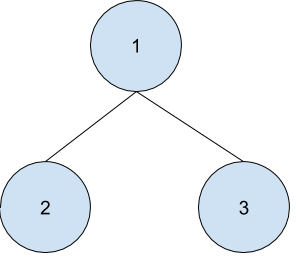 A traversal algorithm that considers every node in a tree must consider each node in some order. It might touch the nodes in this order: 2, 1, 3. Or this order: 1, 2, 3. And so on.

We can categorize these nodes into groups for convenience. Let us say that Node 1 is the Parent Node while Node 2 and Node 3 are Children of the Parent.

When we use terms like "pre-order", "in-order", or "post-order", we are really describing the order in which our implementation of an algorithm touches the parent node.

For example, an algorithm performs a pre-order traversal of the graph above if it touches the parent node before the child nodes. ( vis 1, 2, 3 )

An algorithm performs an in-order traversal of the graph above if it touches the parent node in between the child nodes. ( vis 2, 1, 3 )

An algorithm performs a post-order traversal of the graph above if it touches the parent node after the child nodes. ( vis 2, 3, 1 )

For example, what if we want to implement Depth-First Search (DFS) of a more complicated graph?

Here's a larger graph traversed with a pre-order implementation of DFS: 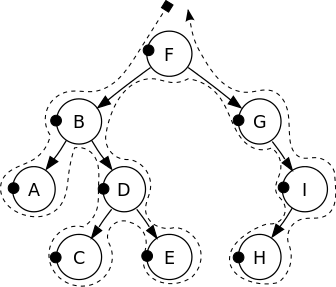 The same goes for in-order traversal ( every parent is guaranteed to be processed in between its children ): 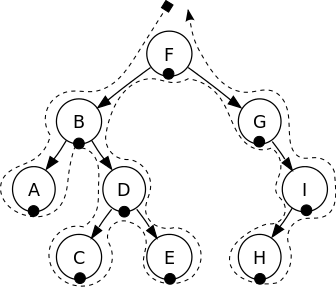 And post-order traversal ( every parent is guaranteed to be processed after each of its children ): 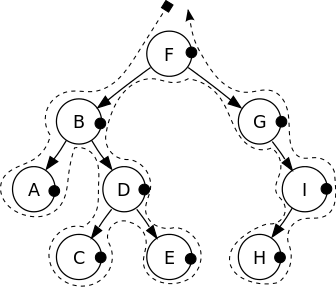 Note that all of the above are different implementations of the same algorithm, namely Depth-first Search. So, we have taken one algorithm and implemented it three different ways, each handling parents in a different order relative to their children.

In the same way, any graph traversal algorithm can be categorized as pre-order, in-order, post-order--or possibly none of the above. These terms merely describe the order in which parent nodes are processed relative to their children.

Note that the Wikipedia entry on tree traversal describes several implementations of several traversal algorithms, but is able to categorize all of these algorithms in terms of the order in which they process parents relative to their children.

Not the answer you're looking for? Browse other questions tagged trees search-trees graph-traversal order-theory or ask your own question.

3
What is the complexity of depth first traversal that don't label nodes as discovered?
9
What does pre-, post- and in-order walk mean for a n-ary tree?
0
Understanding Jeff Erickson's analysis of a basic tree traversal algorithm
4
Girth of Undirected Graph with Positive Integer Weights
2
Breadth First Search actually require specifically Queue instead of any other type of Collection?
5
Understanding the "ordering of the four types of edges" in DFS
1
"Process functions" in iterative and recursive depth-first search
3
When searching graphs breadth-first and depth-first color the graph. Who un-colors the graph when the search is completed?
4
Computing a pre-topological sort using a BFS/a queue