Choosing a production with $\lambda$ in Context-Free Grammars

Given the context-free grammar

For example, parsing the string $xyy$ could give two different results: 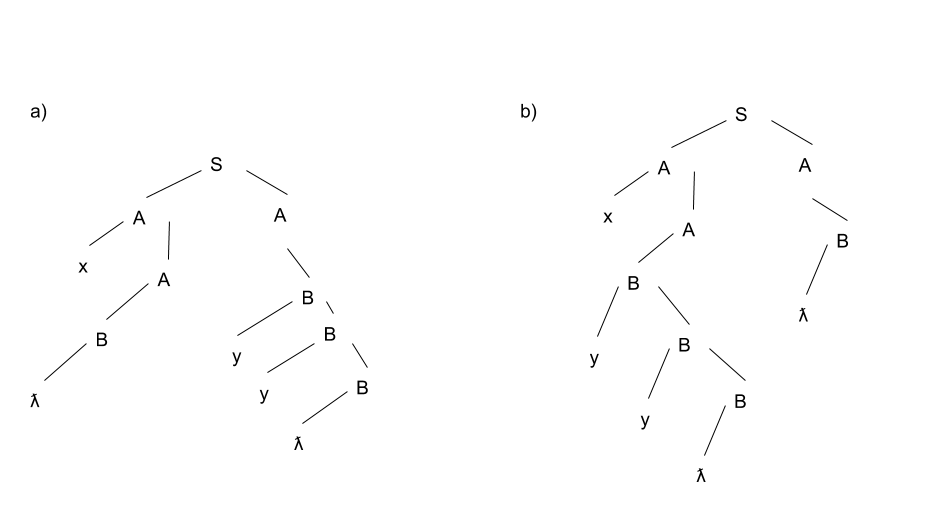 Is there a formal way to prefer one of the two possible options? Which one is the "default"?

I think you have understood this backwards. The CFG defines the language. All strings that can be derived by using the rules defined in the CFG are present in the language. The empty string itself is a terminal variable. You would substitute it in the string that you're deriving and is just empty.

I would say the formal way to derive your string in exactly one particular way is to use a grammar without ambiguity.

Not the answer you're looking for? Browse other questions tagged formal-grammars parsers or ask your own question.

7
Generating a set of minimal-length strings that, together, invoke every production of a context free language
0
Are constituency grammars and dependency grammars two different types of context free grammars?
5
Removing lambda-productions when it's at the start symbol
0
Handling epsilon productions in recursive descent parsing
0
How to determine valid handle for given bottom up parser?
2
Are Context-Free Grammars with only one Production Rule always Unambiguous?
6
Are these special (one production) Context-Free Grammars always unambiguous?
1
Is my grammar correct and context free?
0
Grammar for $\{a^n b^n c^m d^m \mid n \geq 1, m \geq 0\}$