I was reading Minsky's and Papert's book on perceptrons and I was reading theorem 0.6.1 and I was having a hard time understanding it. The theorem was about proving that the property "connected" was not a local property i.e. that you somehow had to see the whole picture to know if something was connected or not. In particular their prove shows that "connected" is not a conjunctively local property of any order (for definition of conjunctively local see appendix at the end of this question).

In particular goes as follows:

Suppose that $\psi_{CONNECTED}$ has order K. Then to distinguish between these two $k+1$-wide figures:

however, the existence of $S_j$ doesn't make sense to me and thus, the remaining of the proof remains a mystery to me. If anyone can clarify that and the remains of the proof that would be fantastic!

Also, for completion, the whole proof is provided in the appendix2.

Recall the definition of Conjunctively local:

or directly from Minsky's and Papert's book: 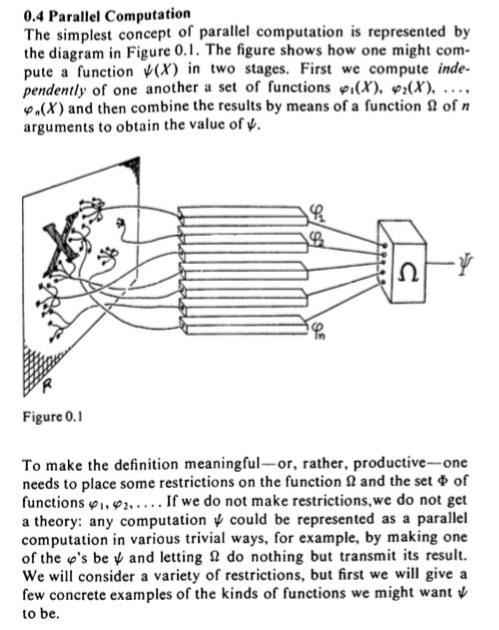 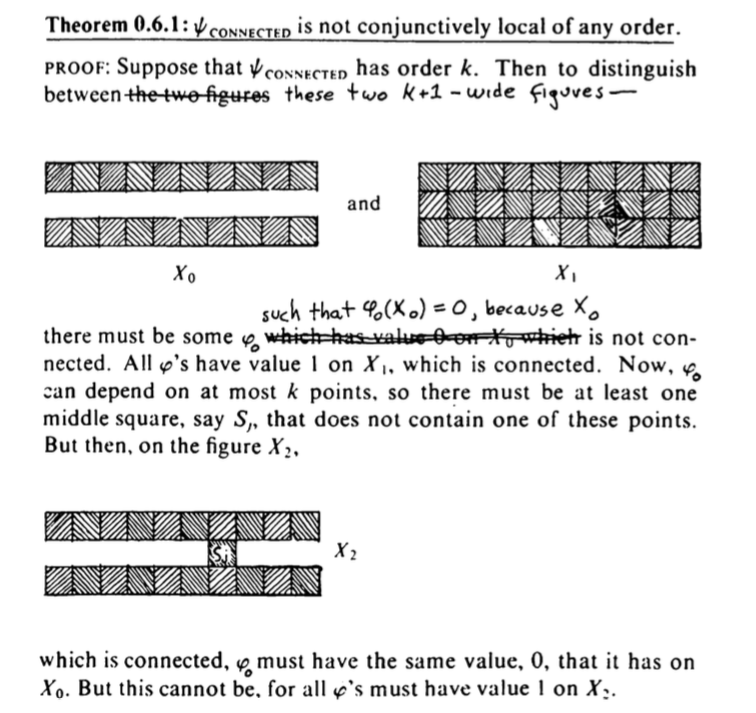 For the sake of an exercise I want to explain my understanding (and to provide a alternative explanation).

When $\psi_{CONNECTED}$ computes whether something is connected or not, each predicate $\varphi_i$ can only see at most $k$ squares/pixels. Therefore, we define $\varphi_0$ to be the predicate that returns 0 on the not connected figure $X_0$. Note that even in the "best case" $\varphi_0$ can never process all the middle points that separate the strips of $X_0$ (because $\varphi_0$ can only see at most $k$ squares/pixels and the shape $X_0$ is of length $k+1$, so it will always miss at least one square/pixel). Therefore, there will always be some middle square $S_j$ that is not processed by $\varphi_0$. Therefore, if we make this square connect the top and bottom strips of $X_0$ and call this new figure $X_2$, then this new figure presents a problem. The problem is that its a figure nearly identical to $X_0$ but that its connected. Note this means that $\varphi_0(X_0) = 0 $ but it also return $\varphi_0(X_2) = 0$ (but it should return 1). Why? because it doesn't matter which squares/pixels $\varphi_0$ process, it will process them identically in both $X_0$ and $X_1$. The only chance for it to process them differently for $X_2$ than in $X_1$ is if $\varphi_0$ processed $S_j$. However, $X_2$ was constructed such that $\varphi_0$ messed up and did not process $S_j$. Thus, this presents a contradiction. There is one shape $X_2$ where our big predicate $\psi_{CONNECTED}$ says not connected when it is in fact connected. Thus, it cannot be conjunctively local of any order because if it were we can always create a figure larger where we can make it mess up and not notice its actually connected.

In addition as the authors mentioned at the end, connected can of course be computed if some predicate $\varphi_i$ is allowed to see the whole 2D plane/image. However, this would be silly, since we need $k$ to be less than the size of the image, otherwise, we wouldn't really be constructing a meaningful definition for local. So we must have $k < |image| = | R | $.

Not the answer you're looking for? Browse other questions tagged algorithms logic artificial-intelligence proof-assistants or ask your own question.

2
How would one construct conjunctively local predicate of order k for checking if a shape is Convex?
0
Divide and Conquer Algorithm for Hidden Line Removal
13
Why does soundness imply consistency?
19
Can proof by contradiction work without the law of excluded middle?
8
Why doesn't Godel's Second Incompleteness Theorem rule out a formalizable proof of P!=NP?
0
Formal definition of loss surface of multi-layered networks
15
"Famous logicians have made embarrassing errors here," a line from SICP. What is this referring to?