I have a special kind of decision graph, where Multiple decisions must be made in combination, to accomplish the path. Not sure if Multiobjective or Combinational is the right term here, let me know if there is a better one. Picture better then words: 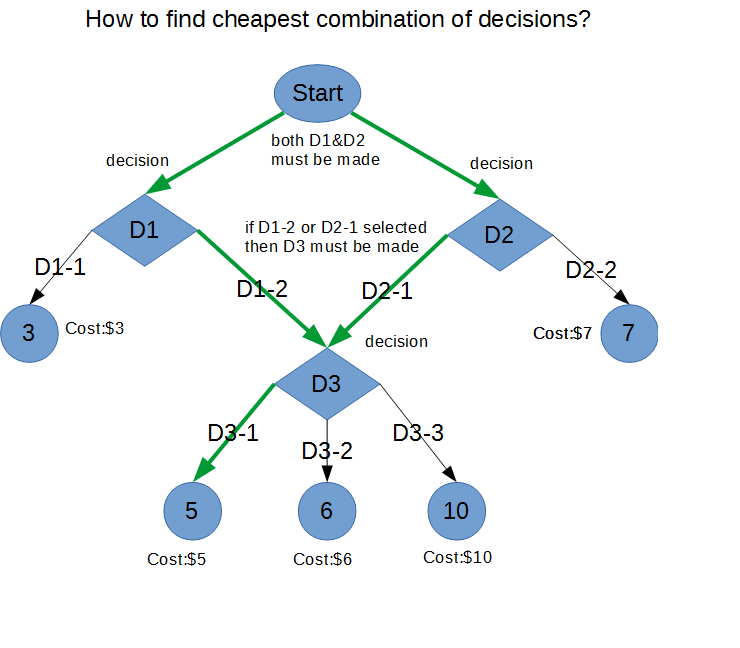 Green is the cheapest Path for this example (D1-2,D2-1,D3-1) that you can calculate yourself empirically or combining all possible combinations and sorting by total costs. Total costs of Green path is $5.

Find the best (BigO runTime) algorithm to find cheapest path covering this kind of graphs (without iterating all possible combinations and calculating its costs)? Pseudo code would help. Also what is the name of such type of decision graph?

Now, observe that any solution path in the decision graph that we have built has weight at least $n$. In fact, whenever we encounter a fresh variable $x_i$, we are forced to take either $t_i$ or $f_i$, both of which have cost $1$. Furthermore, any path with cost not exactly $n$ has taken, by the pigeonhole principle, both $t_k$ and $f_k$ for some $k$, which means that it does not correspond to a consistent assignment of truth values to the variables of $V$.

We conclude that determining the optimal path is at least as hard as $\mathcal{3SAT}$, and consequently, as every problem in $\mathcal{NP}$.

As always with $\mathcal{NP}$-hard problems, your choice is to go with either heuristics or approximation schemes. If I may make a suggestion, problems like this are a good fit for logical programming tools, such as CSP/ASP.

Not the answer you're looking for? Browse other questions tagged algorithms graphs decision-problem weighted-graphs or ask your own question.

4
Algorithm for automatic/optimal database joins?
2
Directed cyclic graph with node rewards and arc costs
2
Find number of nodes that seperate graph to two or more subgrahps when removed individually - Find articulation points on a non-directed graph
2
Is there a variant of Dijkstra’s algorithm for partial recalculation?
2
Shortest path with nodes containing collectibles of negative cost
2
Given all pairs shortest paths matrix, find graph with minimum total sum of edges
0
Finding the maximum disjoint weight in a weighted node graph
5
Algorithm design: find any path in an undirected acyclic graph which has a total sum of the nodes as a specific value