How would you go about proving that this Language is Context free. I'm having issues with drawing the PDA for this.

I so far assume that when a string of 11s occur add x to the stack and when 010s add y to the stack, but I'm having issues drawing that part out the part were you check to see if the number of x's in the stack is greater then the number of y's.

So in this case whenever a 11 is encountered do I draw out the transition like example A or B? 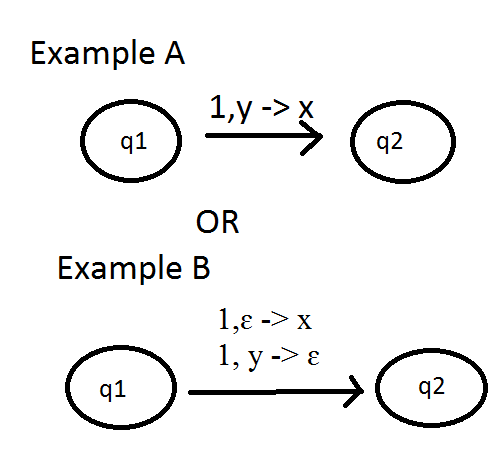 Sketch of an answer:

As you suggested, use the states of the PDA to check when a $11$ or a $010$ has been found. Then, instead of keeping track of the number of $11$s and $010$s separately, keep track of the difference in their numbers.

Thus, at any given point, the stack consists entirely of $x$s or entirely of $y$s, or only the $\$$. The number of $x$s denotes how many more $11$s have been encountered as compared to the number of $010$s, and vice-versa.

Not the answer you're looking for? Browse other questions tagged pushdown-automata or ask your own question.

28
How to prove that a language is context-free?

3
How can one simulate a PDA with a FIFO queue PDA?
3
Push down automata for $\{a^n b^n c^n | n \ge 0\}$
2
Is the language with decreasing numbers of a, b and c context-free by pumping lemma?
2
Converting final state PDA to empty stack PDA
1
Determine whether a context-free language is deterministic or not
1
Understanding PDA and Equivalence of PDA and CFG
4
Prove or disprove {wtw^R | |w| = |t|} is context free
0
How to design PDA for this language?