Each vertex may have any number of outgoing edges. All vertices that don't have any outgoing edge, are considered output vertices.

The goal of our algorithm is to associate with each vertex a number 0, 1 or 2 that respects the constraints: 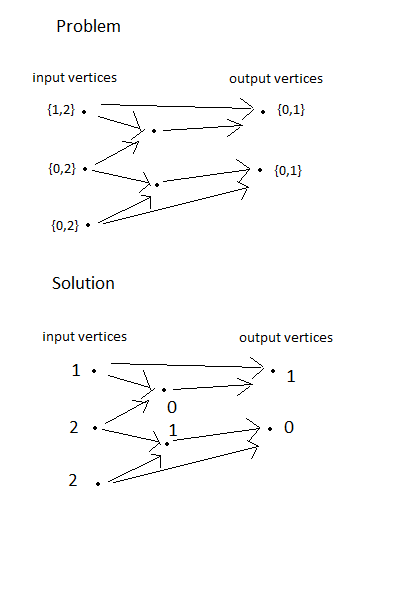 The general case for this problem should be NP-complete. But in my case, all paths from any input vertex to any output vertex have length at most $c$, where $c=27$. Does this make the problem feasible?

The upper bound on the path length means that each output vertex depends on at most $2^{27}$ input vertices... which is technically a constant.

Your problem is equivalent to the following:

In your particular case, we are guaranteed that each row of $M$ has at most $2^{27}$ non-zero entries, and you're asking whether this is sufficient to make the problem feasible. I don't know the answer to that.