I'm trying to implement the Biased Crowding Distance in NSGA-II as described in the paper Integrating User Preferences into Evolutionary Multi-Objective Optimization by Branke and Deb.

Basically, from what I understand, given a set of points on a Pareto-front, we need to project the points onto a hyperplane with a direction vector $\eta$. Doing this will give the new crowding distance $d'$ based on the locations of the individualson the hyperplane with direction $\eta$.

To illustrate, see the figure below. 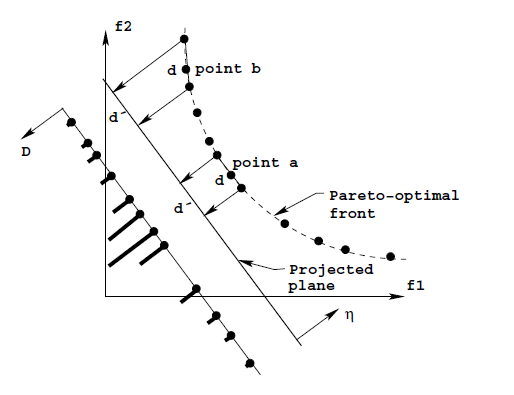 Thanks and any information would be very helpful.

I'm not sure if this should be considered a computer science question or not, it seems more an algebra question than anything else.

A vector is a direction vector of a hyperplane if it is parallel to that hyperplane (source).

Consider $\eta$ as described in the paper, then the hyperplane he is referring to will be $$\eta_1 f_1 + . . . + \eta_n f_n = c $$ for a constant $c$. Because you are only interested in the distance between the points after projection, and not the location of the projected points, you can select $c = 0$, as shifting around the hyperplane won't affect the distances between the projected points.

Since the origin is contained in this hyperplane, the hyperplane is a subspace, call it $H$. We can then represent each $p_i$ as a vector $\vec{p_i}$ and project the vector onto the subspace.

Not the answer you're looking for? Browse other questions tagged linear-algebra genetic-algorithms or ask your own question.