I was reading how to find the Lowest common ancestor in a DAG. A DAG can have scenarios where the LCA yields multiple solutions and I feel the accepted answer explains that pretty well.

However, one of the answers also mentions a paper that talks about because of the given scenario above, for DAGs there may be cases where you would want to find the lowest SINGLE common ancestor.

From the limited Abstract linked in the answer above, the paper says this:

We derive a new generalization of lowest common ancestors (LCAs) in dags, called the lowest single common ancestor (LSCA). We show how to preprocess a static dag in linear time such that subsequent LSCA-queries can be answered in constant time. The size is linear in the number of nodes.

We also consider a “fuzzy” variant of LSCA that allows to compute a node that is only an LSCA of a given percentage of the query nodes. The space and construction time of our scheme for fuzzy LSCAs is linear, whereas the query time has a sub-logarithmic slow-down. This “fuzzy” algorithm is also applicable to LCAs in trees, with the same complexities. 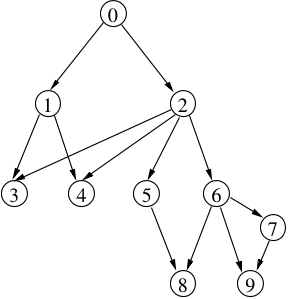 The LCA of this picture for nodes 8 and 9 is straight forward (it would be 6) but for nodes 3 and 4, the LCA could yield either 1 or 2 because they are at the same level and are both common ancestors. In this case, perhaps it makes more sense to find the LSCA which would be 0 since its the single ancestor of the two.

How does finding the LSCA of a DAG affect time complexity compared to finding the LCA which could yield multiple solutions and what are the best methods to achieve it?

Browse other questions tagged algorithms trees dag or ask your own question.