What is the whole picture of the NP-hardness proof of Super Mario Bros?

I am reading the NP-hardness proof of Super Mario Bros. in the paper "Classic Nintendo Games are (Computationally) Hard" by Greg Aloupis, Erik D. Demaine, Alan Guo, and Giovanni Viglietta.

I can get the basic idea of the proof framework presented in Section 2.1. I think I also understand the Start gadget, Finish gadget, Variable gadget, Clause gadget, and Crossover gadget individually used in this proof. See the figure below.

However, I failed to plug these gadgets into the proof framework to construct a complete instance/scenario of Super Mario Bros. Specifically, 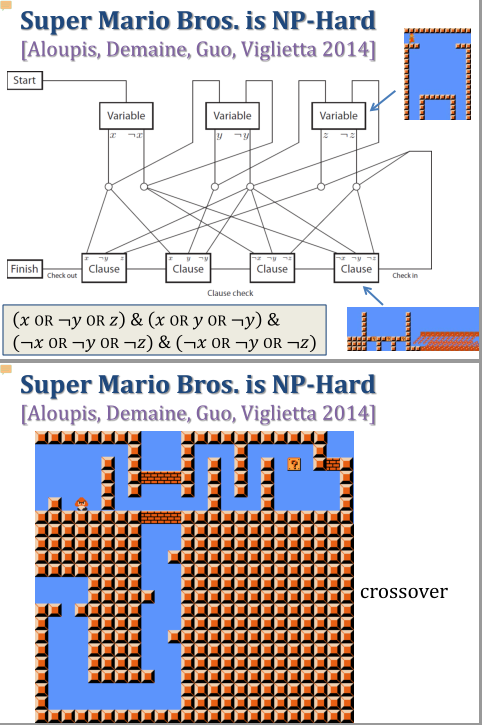 Short answer to your first question is to use graph algorithms to compute gadget assembly. Erik mentions this briefly. Keep in mind the gadgets don't necessarily have to be oriented as shown above. You could rearrange the gadgets however you wish as long as you retain the edge connections and entrance/exits of the graph.

The idea of "falling down" from a variable is so that there is no way to get back up to it. After you fall down there could be a tunneling system or corridor that allows Mario to get to the bottom side of a clause and hit the question box from below.

The crossover gadget is placed where edges intersect (edges between literal and clause). This is because SMB is a 2-dimensional game and thus the graph using all these gadgets must be planar. The crossover gadget will then act as a vertex where the two intersecting edges can safely connect and not interfere with each other. They will not interfere because if you enter top left, you can only leave top right and if you enter bottom left you can only leave top center. More on the planarity and edge interference here.

Not the answer you're looking for? Browse other questions tagged complexity-theory reductions np-hard 3-sat or ask your own question.

3
Why isn't the Generalized Super Mario Bros. obviously in NP?

1
There is equivalence in an NP-hardness proof or not?
0
NP-hardness proof, what is wrong with it?
2
Proof of P-Hardness by reduction
2
Is the NP-hardness Proof with One Way Implication Correct and Why?
0
On the proof of NP-Hardness of the Cardinality Constrained Quadratic Knapsack Problem
3
Why isn't the Generalized Super Mario Bros. obviously in NP?
2
Proof for NP-hardness of simultaneous minimization and maximization of a weighted subset