Why is step 4 and 5 necessary in this Cycle Cover Superstring Algorithm? 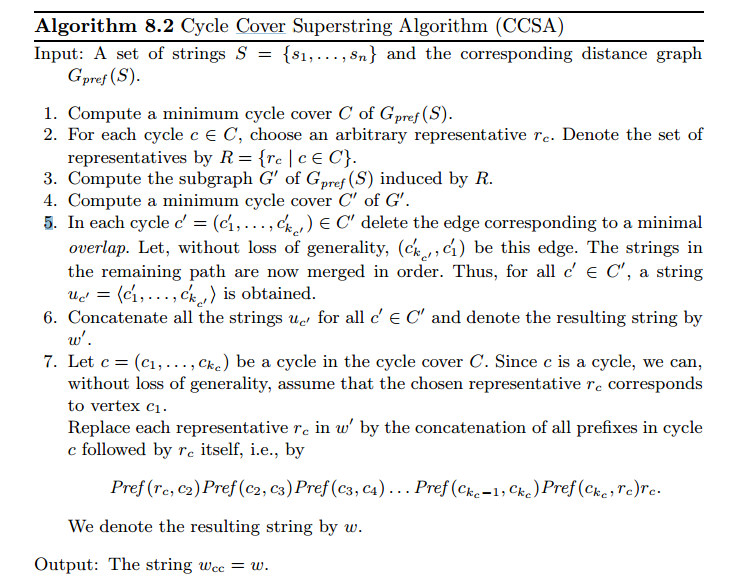 Why is it important that we compute a minimum cycle cover for the representative vertices? They will be replaced by the concatenation of all prefixes in the cycle followed by the representative itself, and then these strings will not be merged, they will be concatenated together to achieve a superstring. Why is maximizing overlaps a goal, if we don't merge, only concatenate? I found a different algorithm for Cycle Cover Superstring, and here step 4 and step 5 are left out! 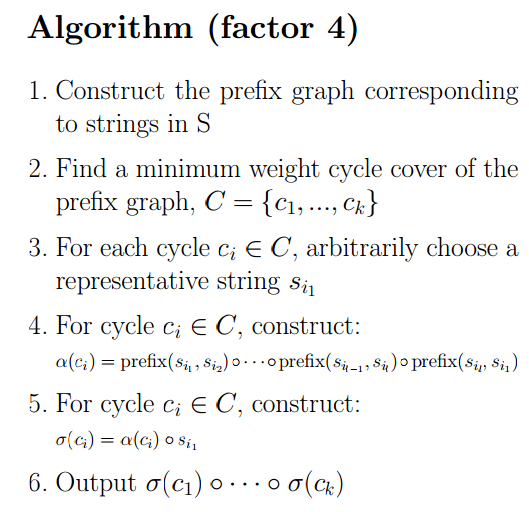 To me, the second algorithm makes perfect sense so I decided to implement that one, but could anybody tell me why would be the first one better? It seems to give the same output but it's slower. I'm afraid I misunderstood something. The first algorithm can be found in Algorithmic Aspects of Bioinformatics.

EDIT: I tested the two algorithms with multiple examples on paper and on computer using my implementation. The outcame wasn't always the same, but the length of the superstrings was always the same, which means that both algorithms are good, only that the second one is faster. I'm more concerned about that my interpretation of the first algorithm isn't correct - once it states that the representatives are merged in order, and then that they have to be concatenated. I posted this question hoping that somebody would notice that I somehow misinterpreted the first algorithm.

Browse other questions tagged algorithms substrings or ask your own question.

63
Floyd's Cycle detection algorithm | Determining the starting point of cycle
3
Relation between the “Point-Cover-Interval” problem and the “Interval Scheduling” problem
24
Is there an efficient algorithm for this vertex cycle cover problem?
5
Intuitive proof for Floyd's cycle detection algorithm
6
Algorithm: Shortest path (walk) with keys and doors
1
What is the shortest superstring for $\{c (ab)^k, (ba)^k, (ab)^k c\}$?
0
Negative cycle detection using Bellman-Ford and its correctness