Whats the difference between Processor bus and System bus

Is there something called Processor Bus? Whist solving one of the MCQ I ended up seeing the term "Processor Bus". Does this thing actually exists?

I did some research, but couldn't find one article that talks about Processor bus.

It would be great, if someone can guide me along.

A lot of terminology is vendor-specific. Different architectures and CPU vendors use different terms to describe different ways of connecting CPUs and peripherals, and the technology is constantly changing.

In what follows, I'm going to use the word "bus", but do be aware that a bus could be realised in multiple ways depending on speed and requirements, such as a point-to-point, crossbar, or switched fabric topology. It's logically a bus, even if it isn't physically a bus.

Every time you have more than one thing which needs to communicate with each other thing, you need a bus/switch/whatever to connect them together. 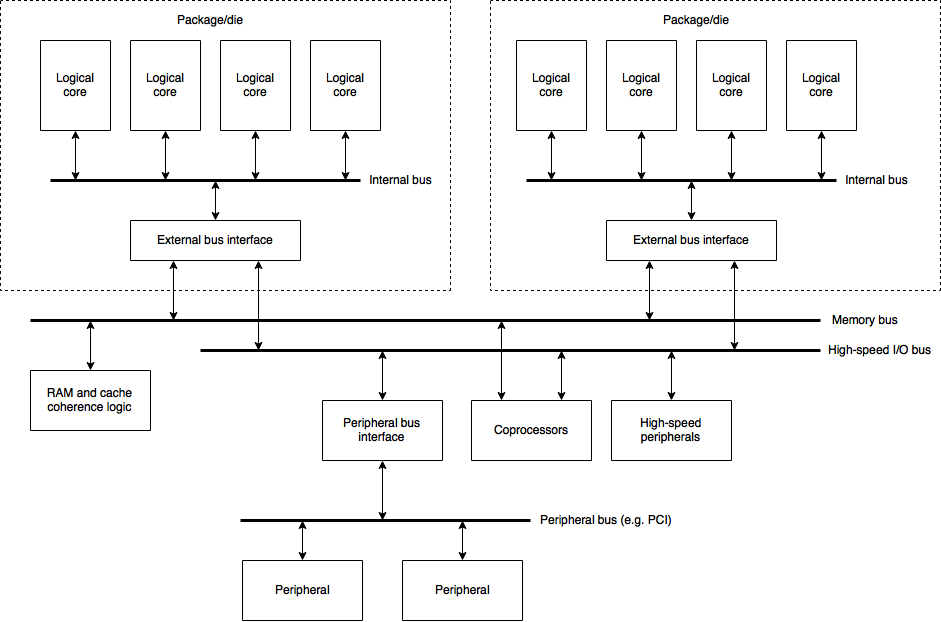 Each package or die comprises multiple logical CPUs which are connected by some kind of internal bus. These are then connected to a common bus which connect the CPUs together, along with high-speed/high-bandwidth peripherals such as RAM (which increasingly looks like a peripheral these days), coprocessors such GPUs, and fast devices such as gigabit ethernet, Fibre Channel, InfiniBand, etc.

This bus is then connected via interfaces to lower-speed busses such as PCI, USB, SCSI, I2C, etc. Most of the things that you typically think of as "peripherals" are connected to peripheral busses such as these.

Of course this is just an illustrative example, not based on any particular computer design. Different architectures do different things. Large-scale high-availability machines (e.g. modern mainframes) typically have "local" RAM for each CPU die or motherboard, and CPUs designed for those high-availability applications commonly have a backplane bus interface built onto each CPU package plus a redundant backplane connection hanging off the high-speed I/O bus.

So given all that, the term "processor bus" probably refers a bus which connects processors together. That would mean one of two things:

Personally, I think the terms "processor bus" and "system bus" lead to confusion, one way to look at a processor bus vs a system bus is how Intel chips deal with messaging between the CPU and the system peripherals. Intel separates these into a "Northbridge" and "Southbridge".

3
How are the control signals derived in the MIPS pipeline?
0
Whats the logic between MAR, MBR and Control Bus
1
If the MOVE instruction in a Transport Triggered Architecture can implement a NAND gate (as a Functional Unit)
2
Bus and System Clocks
20
Would it be wrong to say that the processor (and hardware) is the implementation of an interpreter for machine language?