Given a DFA A, give a formal construction of a PDA with three states M such that L(A) = L(M)

given a Deterministic Finite Automata, I am looking for a formal construction of Push Down Automata with 3 states such that the languages of the DFA and the PDA are the same. How we can prove correctness?

The automaton will simulate the leftmost derivations of $G$, and its stack symbols include the set $V$ of nonterminals and the set $\Sigma$ of terminals as well as a bottom marker $\$$. Initially, $\$$ is placed on the stack together with $S$. The main loop of the automaton is that involving the state $q_2$: If a nonterminal $A$ appears as the topmost symbol on the stack and there is a production $A \rightarrow w$ in $G$, then $A$ is replaced by $w$ in reverse. If a terminal $a$ appears as the topmost symbol on the stack and the next input symbol to be read is also $a$, then the automaton proceeds. Finally, if all input characters have been read and the bottom marker is the only symbol on the stack, the computation succeeds. 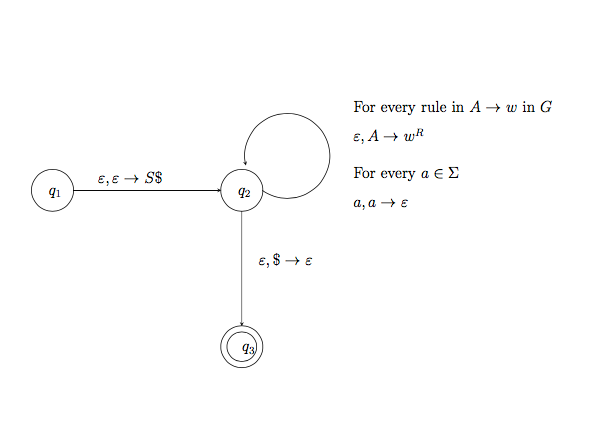 I leave the rest of the details to you.

Not the answer you're looking for? Browse other questions tagged finite-automata pushdown-automata or ask your own question.

4
Relaxing the stack in a push down automata
0
Number of Final States Subset Construction for NFA to DFA
0
Relation of deterministic push down automata and lower elementary recursion
3
Can every DFA be simulated by a PDA?
2
context free grammar not closed under relative complement using product construction of pda and dfa
1
Minimal DFA with more states than its equivalent NFA
1
Languages such that DFA requires $\Omega(c^k)$ states but NFA needs only $O(k)$ states?
1
Can CFGs generate all languages? Are they (PDAs) finite or infinite state automata?