I was recently given an assignment at university asking me to discuss the universal computational capability of Conway's Game of Life.

I'm not required to actually build up a Universal Turing machine in Life, but rather I'm supposed to provide a step-by-step explanation of universality of GoL (as well as the meaning of such result).

(Is it a correct reasoning?)

The last point of the assignment asked me to prove the universality of Life by providing an implementation of logical gates in such model, and here come my doubts. I have read dozen of times in StackExchange forums, papers, etc. that the necessary conditions for a system to be Turing-complete are:

But I never read anywhere about logical gates (or logical propositions in general). So, my questions are:

Thank you in advance!

Here is a link to the pdf file of the report that I submitted, thanks for your suggestions!

The computer you typed this message onto is Turing Complete (well, sort of), yet the only tool it uses is logic gates. I can give you a simple(ish) example of each:

For the first requirement, processors can use multiplexers to create conditional jump options. Multiplexers are basically just a bunch of AND gates.

Number 2 is a bit more complex. Computer memory consists of logic gates that feed back into themselves. If you study memory, you begin by studying latches and flip-flops. Here is a simple latch that stores which of the two input lines on the left turned on most recently: 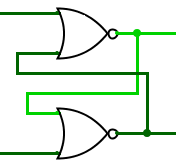 Thus, it stands to reason that, if you can imitate logical gates, you can create a Turing-Complete machine just as you would if you could simulate a Turing Machine. So, it may be that you don't need to show how to simulate a TM in GoL nodes, but instead take a step to show that logical gates are sufficient to be Turing Complete.

I have one further thought for you that might make your life simpler. You don't need every gate. NAND and NOR are each sufficient, on their own, to create every other logic gate. You can easily do a search like "nand logical completeness" to find the logic gate diagrams to show this.

I think that your plan is good, but the most important is for it to be intuitive for you ! If you don't feel secure with it, just change it !

Then, for GOL, I made multiple lectures, but as I'm French, I don't think you would like to see them... My habitual plan in order to present it is :

After that, if you want to speak about the TM from the angle of T-completeness, I suggest you to also just show a bit of $\lambda$-calculus (or at least to speak about Church, for the Church-Turing Thesis), gif you have the time for that.

Is the capability of implementing logical gates (i.e. evaluate any arbitrary logical function) another requirement? Or, is it an alternative requirement?

If you spoke about $\lambda$-calculus, you will have said that it is equivalent to TM. As you said, logic gates allows to compute any function, including all the possible $\lambda$-functions. You're done.

If you really want to use TM to prove the T-completeness of GOL, you could say that the TM's transition table could simply be a set of logic gates, that takes the actual state etc... and output the new one, that the memory tape could also be a memory made out of logic gates, and finally that the read/write head could be something like a multiplexer and a binary counter, that allows to select a cell and to operate on it, and then to change the cell, to operate again etc...

Not the answer you're looking for? Browse other questions tagged turing-machines logic turing-completeness cellular-automata or ask your own question.

14
Cell walls in Conway's Game of Life?
10
Time Complexity of Universal Turing Machine Simulations and the Time Hierarchy Theorem
4
What is the distribution of Garden of Eden patterns in cellular automata with increasing pattern size?
3
Rice's theorem vs Turing completeness
0
How to prove computational completeness of a variant of P system
5
Is there any example of automatas (or similar) systems that emerge complex internal structures on its own?
17
Connection between NAND gates and Turing completeness
2
Proof of universality in the circuit model
2
Whats the signifgance of Conway's Game of Life?
1
Had Conway's Game of Life or any C-A been demonstrated to generate non-repeating pattern?