how to interpret the coefficients of binary logistic regression? 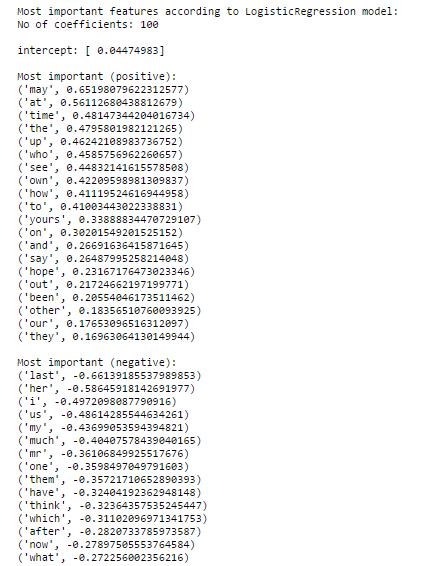 machine-learning classification statistics
Share
Improve this question
edited May 29 '17 at 14:10

I don't have the rep to comment, but the answer to your question is "sort of." It would take me too long to answer this question completely and with the proper care, so i will point you to a good resource http://www.appstate.edu/~whiteheadjc/service/logit/intro.htm

There is a section midway through on interpreting your regression coefficients. In your specific case (as I imagine all of your independent variables only take on positive values), your interpretation is fine. If $b_1$ is the slope coefficient of an indicator variable for some word, then a 1 unit change in $b_1$ (i.e. if the word corresponding to $b_1$ is seen) corresponds to an $\exp{(b_{1})}$ change in the log odds of your model (e.g. the probability of the person being a boy is $\exp{(b_{1})}$ more likely). Hope this helps

Not the answer you're looking for? Browse other questions tagged machine-learning classification statistics or ask your own question.