I've come with an idea for reduction from the set-cover problem to the vertex-cover problem, But I'm not sure if this reduction is correct. I saw in this post's comments that "There cannot be a nice reduction of this sort".

is this reduction even right?

Another reason which may help understanding why this reduction (from Set Cover to Vertex Cover) is not possible is as follows. See the slide below (taken from Kleinberg, Tardos). 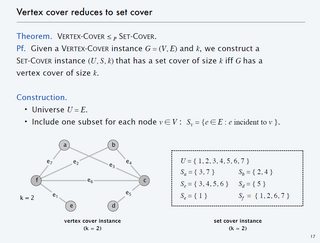 Here, a single element (represented as an edge) appears in exactly two sets (nodes). If this was not the case (and an element appeared in less than or more than two sets), drawing such a graph would not be possible (an edge can only have exactly two ends (nodes)).

Going from Vertex Cover to Set Cover is easy because Vertex Cover is applied on a graph that already exists (we do not need to draw a graph).

Edit (by Discrete lizard): Constructing such a graph from arbitrary sets is possible, but then there must be multiple edges representing the same element. The construction of a graph fails for another reason: there may be at most one edge for every pair of nodes, which need not be the case for arbitrary sets.

Not the answer you're looking for? Browse other questions tagged complexity-theory np-complete reductions or ask your own question.