I'm studying several disk scheduling algorithms; however, I'm kinda confused with SCAN. I understand the concept, but I don't understand the example given in the book. I think that the author made a mistake, but I want to be sure.

The example is the following:

As seen in the image, the total head movement is of 208 cylinders 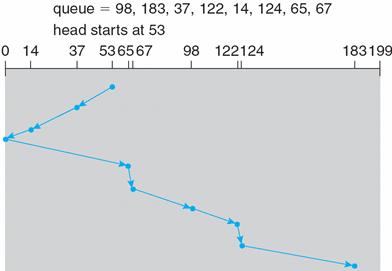 The book also has an image and description of C-SCAN:

C-SCAN moves the head from one end of the disk to the other, servicing requests along the way. When the head reaches the other end, however, it immediately returns to the beginning of the disk without servicing any requests on the return trip. The C-SCAN scheduling algorithm essentially treats the cylinders as a circular list that wraps around from the ﬁnal cylinder to the ﬁrst one. 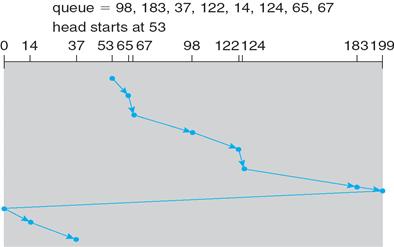 Note: This information was extracted from Operating System Concepts with Java - 8th Edition by Silberschatz, Galvin, Gagne. You can also find this part of the chapter here.

Here are the examples of various disk scheduling algorithms.

Yes you are correct in both the case. The author here has made mistake. For SCAN: The answer should be 236. For C-SCAN: The answer should be 146+37=183.(Note: The head movement when its not servicing any requests is not counted.) Refer the link, it gives a clear concept of how the different kinds of disk scheduling algorithms are used in practice.

I want to add "Why return trip in C-SCAN should not be counted?" Actually the objective behind calculating total head movement is to find the total time spent by read write head to serve the given request, which is proportional to total head displacement. When we move quickly from one end of the disk to other end, there is a displacement; but the time required is negligible(as no requests are served in between) and hence this displacement is ignored.

Not the answer you're looking for? Browse other questions tagged computer-architecture scheduling or ask your own question.