I want to use Android's gyro/accelerometer/magnetometer to predict (over a very short time interval) how image points corresponding to a fixed object will change (without trying to scan for them in the image). In particular, suppose we have an object of known size with model points $v_1, \dots, v_N$. In this question, all vectors are assumed to be in homogenous form. 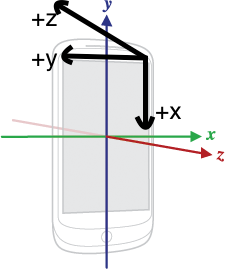 Here is what I am trying:

The rotation vector represents the orientation of the device as a combination of an angle and an axis, in which the device has rotated through an angle $\theta$ around an axis ($x$,$ y$, or $z)$.

Right now, I am stuck tying to verify that this equation actually works. Here is a simple experiment (that I have tried in Python). Let $v = (0, 0, 1)^\top,$ and suppose it is already defined in the camera coordinate frame, i.e., $R_0=I$ and $t_0=0.$ Moreover assume that $R_1= I,$ Then, I rotate the device by a small angle about the $x$ or $y$ axis (which are the same for the device and for the Earth because $R_1=I.$) This rotation constitutes $R_2$ from the equations above. When I try this in Python, this is what I observe for various counter-clockwise rotations:

It turns out that I had two bugs that broke my experimental results:

The method described herein works fine (at least in theory). I'll post an update after I port my python dummy code into Android and see how it works.

Not the answer you're looking for? Browse other questions tagged computer-vision or ask your own question.