for the following languages over the alphabet {0,1}

i have solve it but , i have doubt if i can make the string contain 010 as substring goes to dead state ?!!! 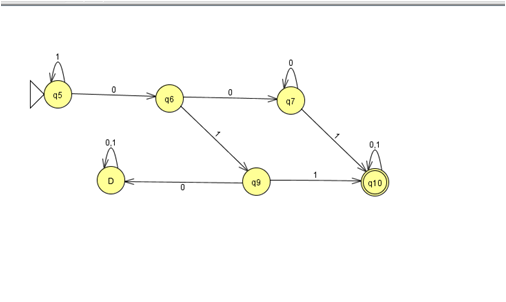 To construct the DFA for a cross-section of the languages (string must be accepted by both DFAs) You can work as follows:

For the union of the languages (string must be accepted by either DFA) it's the same except that the accepting state is where 1 or both of the states is accepting: $F' = (Q_1, F_2) \cup (F_1, Q_2)$. Here it is important that the transition functions are complete.

For completeness the negation of a DFA is the DFA where the accepting states are the states that are non accepting in the original DFA $F' = Q \backslash F$. Again it is important here that the transition function is complete.

2
Automata that recognizes Kleene closure of permutations of three symbols
3
DFA drawing for binary string with substrings of minimum length 3 with at least two zeroes in each substring
2
Prove: possible to construct automata accepting all strings of other automata sans 1-length strings
4
deterministic finite automaton for “does contain substring $w$” is of linear size
2
DFA which accepts all strings starting and ending with 'aa'
1
DFA & RE from descriptive definition of given regular language
1
NFA for all strings not containing 1010
0
DFA containing substring to not containing substring by flipping acceptability of all states?
2
Closure of regular languages under interchanging two different letters