I guess I lack at understanding basic things at algorithm calculations, while learning for an exam. 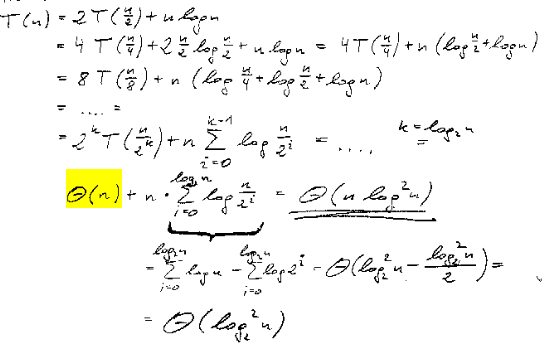 big thanks in advance !

Let's start at the beginning.

Basically, there are 3 very popular notations to express time complexity of algorithms:

The first thing that is in most cases a little bit confusing (and misused), that these notations denote sets - sets of functions. For example, the interpretation of $\Theta(g(n))$ is as follows:

Note: because of the use of $n_0$ and all larger inputs than it, these notations are also called asymptotic notations.

The interpretation of $\mathcal{O}(g(n))$ and $\Omega(g(n))$ are very similar to the one above, but they only refer to either the upper bound or the lower bound, respectively. (Of course, the existence of only one $c$ constant is enough for these 2 definitions.)

So now, that hopefully we are done with the basics, you can see, that if a function $f(n) \in \Theta(g(n))$, it is also true that: $f(n) \in \mathcal{O}(g(n))$ and $f(n) \in \Omega(g(n))$ (in most textbooks, this is presented as a theorem with its proof, as well). In most cases, people don't care about the lower bounds of an algorithm's time complexity - so, it shouldn't really matter whether you see $\mathcal{O}$ or $\Theta$ (this would be the answer to your second question). I think that $\Omega$ is much less frequent than the other two.

I haven't ever seen the $ld$ notation you mentioned. However, I would prefer to use $\log_2$, it will be clear for anyone. Of course, you can use the one you would like to, but make sure to put them into either $\mathcal{O}$ or $\Theta$ (I can't recall a case when only the function was indicated).

Truly hope that I managed to provide a detailed answer you find useful enough. If you have any further question, please feel free to ask.

Not the answer you're looking for? Browse other questions tagged asymptotics recurrence-relation or ask your own question.

92
Solving or approximating recurrence relations for sequences of numbers

5
Why does merge sort run in $O(n^2)$ time?
0
Out of these two algorithms. Is there always an input where A is faster then B? (Big theta notation)
0
Big O understanding given different input sizes
2
Time complexity calculation
1
Why is the run time with a loop of this structure considered O(log n)
5
Why $\frac{n^3}{2^{\Omega(\sqrt{\log n})}}$ doesn't refute the lower bound $O(n^{3-\delta})$?
2
Relaxing hypotheses of Master Theorem
0
Clarifying statements involving asymptotic notations in soln of $T(n) = 3T(\lfloor n/4 \rfloor) + \Theta(n^2)$ using recursion tree and substitution