I am studying generalized Büchi automata and I don't really understand when a state is considered to appear infinitely often. The definition I have is:

A state $s$ appears infinitely often if there exists an infinite set of points $i \in N$ such that the $i$th state of the execution is $s$.

But there's also an example which I think contradicts this definition. 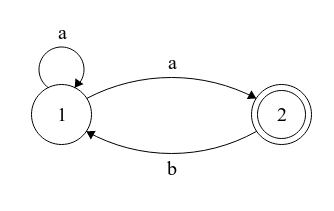 According to the example, the language accepted by this automaton is the language where the string $ab$ appears infinitely often.

Why isn't it just $a$ appearing infinitely often? State 2 would be reached even if we only had $a$ as input. Which is wrong, the example or the definition? Or did I misunderstand the definition?

The definition and example are both correct.

Not the answer you're looking for? Browse other questions tagged automata buchi-automata or ask your own question.

0
Recognizing a language given an automaton
2
Why do all non-empty ω-regular languages have periodic members?
2
Context-free and context-sensitive grammars in FSM with counters
0
Which language is accepted by this Muller Automaton?
6
Büchi automata: accepting run vs. runs with arbitrarily many final states
2
How powerful are DFA with recursive calls?
2
Acceptance conditions when translating LTL to Büchi automaton?
3
Can one determinize finite automata over infinite trees?
3
Equivalence of states between two "quasi-deterministic" strongly connected Büchi automata accepting the same $\omega$-language