I'm trying to figure out optimal round 1 openings for this game: http://generals.io/.

For the purposes of this question, I've simplified some of the rules and mechanics of the game, and I assume that there are no opponents.

Here are the basic rules/mechanics/assumptions:

Here is an example from Generals.io of a section of the game board on turn 22: 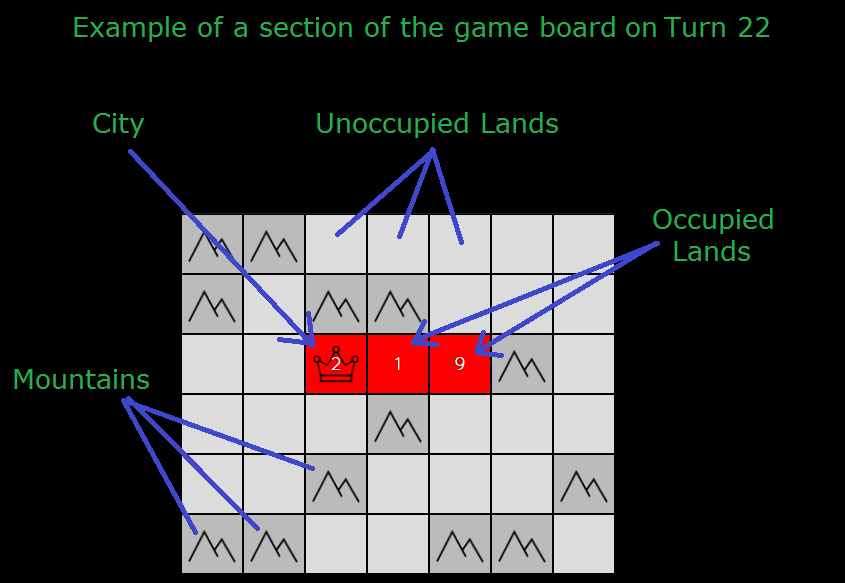 In the above image, the player Idled until turn 20, then on turn 21 Moved (with 10 Units) east from the City. On turn 22 they Moved east again (with 9 Units) from the Land they occupied on turn 21.

Since the City generates 1 Unit every 2 turns, by turn 48 it will have generated 24 Units. So the theoretical maximum number of Lands that could be occupied by turn 50 is 24.

And so, the goal is to figure out an approach that can be used to find a set of actions (or whether any even exist) that would allow the player to occupy 24 Lands by turn 50, given a starting configuration of the game board. Ideally this would be an approach that a human could quickly use to calculate what the actions would have to be, since the game is played in semi-realtime (each turn lasts about 1 second, during which you can issue a Move action or not do anything and just Idle).

QUESTION: Can you come up with a method that a human could use (within ~20 seconds) to get 24 Lands on round 1 whenever a board configuration makes it possible?

I was trying to write myself a "cheat-sheet" to achieve the above. Here's what I have so far.

So here are some explained "action plan" examples of the easiest cases, that seem to allow one to find a solution for quite a few starting board configurations. Once one is familiar with how these work, more concise/readable versions can be utilized as a cheat-sheet.

I = 26: You Idle for 26 turns, and thereafter you cannot Idle or Move over occupied Lands.

I = 24: You Idle for 24 turns, and thereafter you have the following set of options for your last 2 I|M actions:

Here is the concise version of the cheat-sheet that I've been using for round 1 openings in Generals.io:

Before explaining my approach at using the cheat-sheet, there's another important observation:

So, here is how I use the cheat-sheet (keep in mind that all of the below has to be planned out within ~20 seconds, which is the length of time before the game reaches turn 20):

I realize that some of the options on the cheat-sheet are fairly useless (such as I20: {1, 1, 1, 1, 1, 1}) and that the list of possible permutations would start to get too large for human use for smaller initial Idle lengths. This is why I am asking this question, in hopes of learning of a better method.

Browse other questions tagged algorithms graphs optimization or ask your own question.