how does a harddisk work? block / sector [closed]

Want to improve this question? Update the question so it's on-topic for Computer Science Stack Exchange.

Can someone explain me the way harddisks work? :/

The size of a block is specified in the filesystem, am I right? As you can see in the picture from wikipedia, the disk is divided into circle sectors. But the blocks on the outer tracks are obviously larger (physically)... 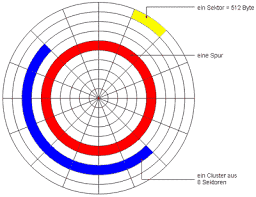 So the "bit-density" on the outer blocks is way smaller than on the blocks near the middle of the disk? I think that I am missing something.... Maybe someone can help me out with another picture / sketch.

Thanks a lot and sorry for the "nooby" question :)

Why would the bit density have to be the same?

Imagine that the platter is a piece of paper and the write head is a pen. The head can write, say, 1000 bits per second by being raised and lowered to make marks on the paper. Writing one bit corresponds to lowering the pen for 1ms. If the sector is close to the centre, the paper will be moving fairly slowly, so holding the pen down for 1ms will leave a short line; if it's towards the edge of the disc, the paper will be moving much faster and 1ms will leave a longer line. Now consider the read head: wherever it is on the disc, if it sees ink for a millisecond, that's a 1; if it sees paper for a millisecond, that's a 0. The data density is lower at the edge of the disc but the heads can do their job without needing to know where on the disc they are. What you might call the "temporal bit density" (a term I just made up) is constant across the disc.

This is something that has changed over the decades.

In the past, the blocks were laid out exactly as you see in the picture. The bit density of the outer blocks was less than those of the inner blocks. This made the hardware easy to build at the expense of being less efficient.

In modern times, we no longer need to make the hardware easy. We're interested in maximum efficiency of the harddrive. Modern harddrives do not have nice easy angular wedges like the old ones do. They, instead, try to keep the bit density as even as possible (maximized at all places).

Not the answer you're looking for? Browse other questions tagged computer-architecture storage or ask your own question.