Is there a name for this traversal-optimized representation of a binary tree data structure?

I have used a purely functional binary tree structure in which there is a single node that is "marked". It allows for $O(1)$ access and modification of the marked node's value, as well as $O(1)$ traversal upwards and downwards.

It is represented as a pair $(M, P)$, where $M$ is the marked sub-tree and $P$ is a list of parent segments. For example, in the following tree 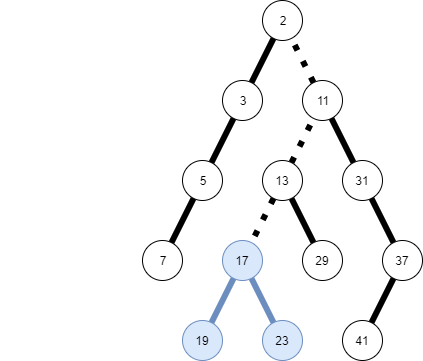 The marked subtree could be represented as follows (where Terminal represents the absence of such a node in the diagram):

The parents could be represented as:

I used the term AccessTree for this representation of the tree, but I decided the name was unclear.

Has this representation of a tree ever been given a name? If so, what is it?

This representation is known as a "zipper" and is described by Gérard Huet in his paper "The Zipper":

The basic idea is simple: the tree is turned inside-out like a returned glove, pointers from the root to the current position being reversed in a path structure. The current location holds both the downward current subtree and the upward path. All navigation and modification primitives operate on the location structure. Going up and down in the structure is analogous to closing and opening a zipper in a piece of clothing, whence the name.

Not the answer you're looking for? Browse other questions tagged data-structures terminology binary-trees or ask your own question.

25
Why does the splay tree rotation algorithm take into account both the parent and grandparent node?
1
Calculating traversal position of a node in a full binary tree, given its path
3
How many number of different binary trees are possible for a given postorder (or preorder) traversal
2
Why isnt node checked for nil value in start when transplanting binary tree
1
Are there data structures that mix a tree structure with lists?
2
Binary Search Tree Stability Data Structure
5
Is there a name and efficient algorithm for this Tree Traversal method?
0
Constructing preorder traversal from postorder of a Binary Search Tree in O(n)
1
What's the name of this tree-like data structure?