I posted a similar question here, however I have another question regarding Venn diagrams and logic circuits... 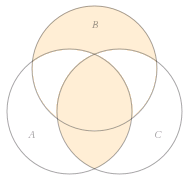 Because it simplifies to $B + AC$? And you can either have the $B$ region, the $AC$ region, or both?

However, apparently it's supposed to look something like this: 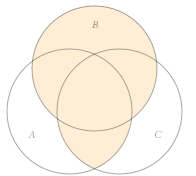 Which I don't understand... Because by the logic that you have $AB$ and $BC$, couldn't you justify saying that you can also shade in $A$, or shade in $C$ (by themselves)?

OR, does saying $A$ mean you shade in EVERYTHING that contains $A$? And only don't shade in the intersection if you had something that said $A * \overline{B}$?

The misunderstanding here is the same as in your previous question. If $B$ is true, the formula is true whatever the values of $A$ and $C$ are. This means that the whole of the $B$ circle needs to be shaded. Shading just the part at the top corresponds to saying "The formula is true if $B$ is true and $A$ and $C$ are both false." That is certainly true, but it's not the whole story.

Not the answer you're looking for? Browse other questions tagged logic circuits karnaugh-map or ask your own question.

2
Someone explain the venn diagram for the logic equation A*(B+C)
1
Boolean Logic Equation
1
D flip flop : How does it work in depth
6
How do we know $\neg \neg LEM$ isn't provable in MLTT?
1
Can someone explain the logic diagram for the Boolean expression NOT A OR B AND C
1
What does it mean when a dot appears in a logic gate other than the NOT gate? (in logic diagrams)
0
For a logic gate to be universal, must it necessarily be able to perform duplication?