Given a bipartite graph $(X,Y，E)$, in which there is no perfect matching, I want to find a smallest subset that violates Hall's condition, i.e., a minimum-cardinality set $S \subseteq X$ for which $|N(S)|<|S|$.

This is not an answer but a collection of notes.

First, we show that every feasible solution corresponds to a Hall violator:

In general, integer programs are NP-hard, but maybe this specific program can be solved efficiently?

there is a polynomial-time algorithm for a closely-related problem: finding a minimal Hall violator (one that does not contain a smaller Hall violaor). It is described in Lemma 2.1 of following paper:

The question is related to the problem of Minimum vertex cover with minimum overlap of one side . Suppose we have a minimum vertex cover $C$ of size $m$. By Konig's theorem, $m$ also equals the size of the maximum matching, so $m < n$.

However, I am not sure that finding a $C$ which maximizes $X\cap C$ also yields the smallest Hall violator.

This problem is $\mathsf{NP}$-hard. The problem is also known as Hall set problem and there is a reduction from Clique problem. See Theorem 3.2.5 from this thesis.

I was thinking along the direction of the Minimum $k$-Union problem. Then, I came across this thesis.

Observation 2: If $S$ is a minimal deficient subset of $X$, then for all $s_1, s_2 \in S$, there exists a path in $G$ from $s_1$ to $s_2$. Otherwise, we could decompose $S$ into two (or more) components, at least one of which would have to be deficient, thus contradicting minimality.

Ok, now that we've identified one collection of minimal, deficient subsets of $X$, we need to ask: what about any others?

In a previous version of this answer, I had neglected case 2), assuming that it was somehow covered during the proof of Lemma 1. However, this is not the case. There can exist minimal, deficient sets which do not look like $D_u$. The following diagram shows such an example. Taking the bolded edges as the matching $M$, we can see that $S = \{A, B, C\}$ is a minimal, deficient set and is not of the form $D_u$. I haven't yet been able to find an effective characterization of minimal deficient sets that fall into case 2, so I am currently unable to complete this proof. 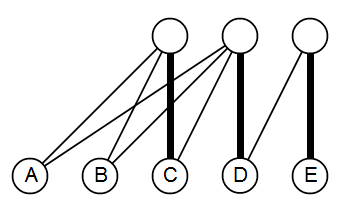 Not the answer you're looking for? Browse other questions tagged np-hard matching bipartite-matching or ask your own question.