Why do we need the valid-invalid bit in a page table?

I'm reading about memory management in Operating System Concepts, by A. Silberschatz. The author says:

[...] the user process by definition is unable to access memory it does not own. It has no way of addressing memory outside of its page table, and the table includes only those pages that the process owns.

Then, the author explains the need of having a valid-invalid bit:

Why do we also need a valid-invalid bit, if a process is by definition able to access only memory addresses stored in its own page table?

The two quoted sentences appear to be contradictory, in my opinion. There must be something I am missing here.

This exact same question has been already asked a few times; however, none of the answers clarified my doubt. Source:

The answers that other users have given don’t explain why the validity bit is needed to protect address spaces. The page table of a process contains only those pages that are valid for that process (i.e., that the process actually owns), so why do we need to replicate a security feature that is already present thanks to the way the page table is implemented?

As David Richerby says, it’s not clear what you don't understand.  Most of my answer here has already been presented in answers (or comments) to the questions you linked to.

I’ll admit, though, that the Operating System Concepts book is probably not as clear as it should be.

The book (going back to Figure 8.6 (Hardware support for relocation and limit registers) on page 361) suggests that the processor knows the maximum user virtual address for a context (process), so if the process tries to access an address above this limit, the access fails with an addressing error.  This concept seems to erode over the following pages; for example, Section 8.4.2 (Segmentation Hardware) (pages 365 and 366) introduces a limit field in each segment table entry, but waves its hands over the question of specifying the maximum virtual address (and, correspondingly, the length of the entire segment table). 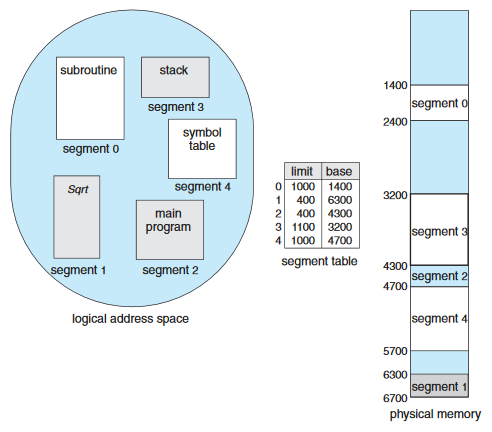 [images copied from this 944-page PDF of the book]
adds to the confusion:

Wandering Logic addresses the fourth bullet with their statement, “Typically the page table is a tree of fixed size pages.” (emphasis added).  So, looking at Figure 8.15 (“Valid (v) or invalid (i) bit in a page table”), excerpted here, 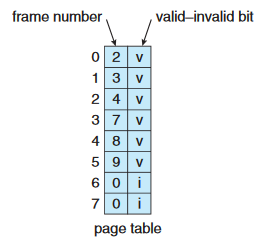 it might be that the system has no way of knowing which pages are valid (0-5) and which ones are invalid (6 and 7) other than marking the entries for the invalid pages with an invalid flag.

But also, while Figure 8.9 is somewhat confusing, it also contains the kernel of part of the answer to your question: The user virtual address space may be segmented / fragmented / sparse / discontiguous.  In other words, just because the maximum virtual address is $N$, that doesn’t mean that every $M$ such that $0 \le M \le N$ is a valid address.  Just as the segments are explicitly shown as being discontiguous (and out of order) in the physical memory (on the right), and are implicitly shown as disassociated in the logical address space on the left, with order being irrelevant**, they may actually be discontiguous in the logical address space.  In fact, the book (somewhat) explicitly (but not clearly) tells us that they are discontiguous, in the last paragraph of Section 8.4.2:

A reference to byte 1222 of segment 0 would result in a trap to the operating system, as this segment is only 1,000 bytes long.

So the 1222nd byte of the logical address space is not the 222nd byte of segment 1, but rather falls in the gap between segment 0 and segment 1.  If we assume that the segments occur in numeric order in the logical address space with addresses at multiples of 2000, starting at 0, then the complete (logical and physical) segment map/table might look something like this:

(I’m sorry, but I just don’t see any reason to display the limit to the left of the base, as the authors do.)  So, pretending that the page size is 100 bytes, using a format inspired by Figure 8.15, we would get a page table that looks like this:

(Consider all entries that have physical page numbers (not flagged “invalid”) to be flagged “valid” — I left that out to save space.)  See also What is stored in the first memory address? Why can’t I print the contents?, where Scott provides an answer that includes a hypothetical (example) virtual (logical) → physical memory map 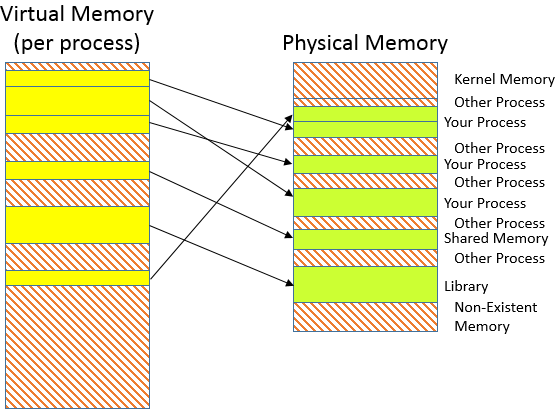 Maybe Silberschatz, et. al., should have used something like that instead of their Figure 8.9.  (Their Figure 8.17 comes close, but, IMO, it is too complex and confusing, and not really the same thing in any case.)

Also, as Pseudonym points out, pages that are valid addresses in the process's virtual address space might not be OK for the CPU to access:

So, the answer to your question,

Why do we need a validity bit when the process has no way of addressing memory outside its page table?

is that there can be addresses within the process’s page table that are not valid addresses to access.

Why do we [also] need a valid-invalid bit?

Good question.  As Silberschatz’s Figure 8.15 suggests, it might be good enough just to set the physical page address (or frame number) to 0.  But, notwithstanding the issue raised in the What is stored in the first memory address? Why can’t I print the contents? question (which Pseudonym also mentions: “The first few pages of the address space of a process are deliberately left invalid so that any attempt to access memory through a NULL pointer is trapped by the operating system.”), page 0 is a valid physical page address.  To say that “0” means “invalid” would make page 0 of physical memory inaccessible — even to the OS.  Pretty much by definition, anything that can fit into a field that is sized to a physical page number will be a (theoretically) valid page number.  Sure, you could use an all-ones value (e.g., 0xFFFFFFFF), but even that could result in a situation where a machine that had 128 terabytes*** of physical memory might be unable to access the last 512 or 1024 bytes; that would be silly.

Because the [page number] entry isn't used by the MMU [if the entry is flagged as invalid,] the operating system can use it to store its own information, like for example a reference to the filesystem entity (for example inode number) where it stored the data to free the main memory for some other processes (it swapped that page out).

So that’s why a page table entry contains a physical page number and a valid/invalid flag.

___________________
*  Apparently these numbers are decimal! — see the last paragraph of Section 8.4.2 (Segmentation Hardware).  This is, of course, totally unrealistic, but I guess it doesn't matter as long as the numbers are handled consistently.
**  which is nonsense — they are numbers, so they have an order.
*** I'm pulling a large number out of my hat here; I haven’t checked that the math on this exactly makes sense.

From Silberchatz, Section 9.4 Page replacement (Page 360): We can free a frame by writing its contents to swap space and changing the page table (and all other tables) to indicate that the page is no longer in memory.

Why do we also need a valid-invalid bit, if a process is [..] able to access only memory addresses stored in its own page table?

Ahh, you say, why do we have an entry for a virtual address that is invalid? That's because of how the page table is structured: it's a table. That means you have to use a slot for an entry even if the virtual address doesn't map to anything.

This is all easiest to think about with a one-level page table, so I suggest you start with that as your mental model.

I think the confusion may be from this quote:

I think this is a bit misleading, or at least incomplete.

There are two views of a virtual address space: the CPU's view (which is implemented by the page table mechanism), and the operating system's view, which involves a bunch of additional data structures and concepts that the CPU's page translation hardware doesn't see.

The CPU has no concept of memory-mapped files, swapping, or anything like that, because that requires knowledge about filesystems and secondary storage devices. The only case it can handle directly is the case where a page of virtual address space maps correctly to a page frame of memory. Anything else requires the operating system to emulate it.

When the bit is set to invalid, from the CPU's point of view, it is not a valid mapping. The CPU's page translation hardware will not translate that virtual address to a physical address, and will instead trap to the operating system.

From there, it's up to the operating system to decide what to do with it. From the operating system's point of view, it may well be "correct" for a task to try to access that page, and in that sense it's not "invalid". It's only the hardware mapping that's invalid.

It may help to think of the "invalid" bit as meaning "cause a page fault". It's up to the operating system to decide what that means and what to do about it when it happens.

It is because , there are scenarios when OS manually needs to access a particular location , lets say for I/O , it passes a buffer address and hence has to convert Logical addresses to physical and hence it keeps copy of page table. Now let's a particular page is swapped for something else , then OS when try to access this location for I/O( Lets Say), it will access a Invalid Location and hence the valid/invalid bit is required

3
Valid-invalid bit in a process page table
0
In memory paging, how does the S.O. know where the page is in secondary Memory?
2
Can this question be solved without knowing the Page Table Entry?
5
Page Table Size in a 4 Level Hierarchical Page Table
3
Virtual Address and Physical Address Space
6
Difference between page table and inverted page table
2
Operating system maintains copy of page table for each process
1
Difference between present - absent bit and valid - invalid bit in a page table?
1
How could a page be invalid in demand paging?