I have a homework assignment that I've been bashing my head against for some time, and I'd appreciate any hints. It is about choosing a known problem, the NP-completeness of which is proven, and constructing a reduction from that problem to the following problem I'll call DGD (directed graph diagnosis).

Now, the problem is whether we can cover all nodes with at most $k$ elements of $D$, i.e.

I think that the Dominating Set problem is the one I should be reducing from, because this too is concerned about covering a subset of nodes with another subset. I tried creating a DGD instance by first creating two nodes for each element of the dominating set, copying all edges, and then setting the $k$ of the DGD instance equal to that of the DS instance.

I have found that there are many good-looking ways to transform the edges and vertices when reducing, but my problem is somehow expressing DGD's $k$ in terms of DS's $k$. Dominating Set seemed a fitting problem to reduce from, but because of this I think that maybe I should try to reduce from a problem that has no such $k$?

Reduce from NP-complete SET-COVER instead.

It is easy to see that the constructed DGD instance has a positive answer if and only if the given set cover instance has a positive answer. In particular, all $m$ pairs $(s_i,o_i)$ have to be chosen no matter what in order to cover all $o_i$; then $k$ of the $m$ pairs $(s_i,o)$ have to cover all the $e_j$, and the first components of those chosen are the solution of the SET-COVER instance. If no such choice is possible the SET-COVER instance has no solution as well.

As the construction is possible in polynomial time, this proves SET-COVER $\leq_p$ DGD. 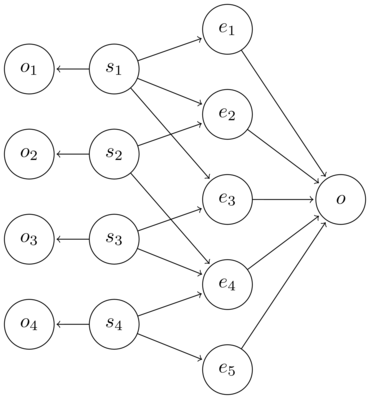 Not the answer you're looking for? Browse other questions tagged complexity-theory np-hard graphs or ask your own question.

10
NP-Completeness of a Graph Coloring Problem
2
Can the edges of a graph be assigned directions such that all nodes in a given subset have in- or outdegree 0, and every other node indegree > 0?
0
Show that Knapsack-like problem on directed graph is NP-hard
3
The Number of Paths in a Directed Graph
2
Proof that AND-OR graph decision problem is NP-hard
1
Confluent directed acyclic graph
0
Reduction from Vertex Cover to Dominating Set
4
Maximum matching in a bipartite graph
1
Maximum Independent Set of special Directed Graph