The problem states the following:

I was able to come up "without overlapping" version as follows: 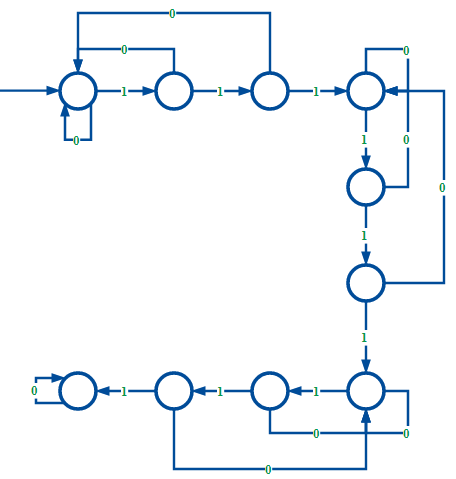 No, you don't need NFA (although it is equivalent to DFA) or PDA or Turing machine to solve this problem. It can be easily done with a DFA.

Lets number the states in given DFA in clockwise fashion starting from start state as Q0 to final state as Q9. First of all, it being a DFA, Q9 should have a self loop with label 1 as all possible transitions should be shown from all the states in a DFA.

Now we need to add two states, lets name them Qa and Qb. The changes in the transitions to be made are as follows:-

These changes in the provided DFA will allow it to satisfy given conditions. It simply counts input substring 1111 as two consecutive 111 and skips a step (of three intermediate states), increasing the count be 2.

I feel I cannot do it with DFA as this will require to have some form of memory.

Why do you feel that a DFA which recognizes 5 1's needs a different kind of memory than one which recognizes three sets of 3 1's each? A DFA has memory (encoded in the state); the limitation is simply that a DFA has only a finite amount of memory. (An NFA is no different.) But in this case, you only need a finite amount of memory. Reading four consecutive 1s puts the automaton in the same state as reading three 1s, some 0s, and another three 1s.

The problem asks to draw a deterministic finite automaton (DFA), not a pushdown automaton or a Turing machine. If you cannot directly come up with a DFA then you can draw a NFA (or NFA with epsilon moves) and then transform it into a DFA accepting the same language as the NFA. Alternatively, if you can write a regular expression for that language then you could transform it into the corresponding NFA and then DFA. NFA, DFA, and regular expressions represent the same class of languages, namely, regular languages which means once you have a regular expression you can obtain a corresponding DFA or NFA and vice versa.

Not the answer you're looking for? Browse other questions tagged formal-languages finite-automata formal-grammars compilers or ask your own question.

16
Languages accepted by modified versions of finite automata
11
Smallest DFA that accepts given strings and rejects other given strings
2
Can DFA with output (definition?) match expressiveness of NFA with unique output?
1
Can quantum computer compute the minimal intersection DFA of numerous minimal DFAs in polynomial time using polynomial number of qubits?
2
Are all finitely recursive context free languages parseable with a regexp?
14
Why is there no permutation in Regexes? (Even if regular languages seem to be able to do this)