How to compare the efficiency of two encoding schemes or hypothesis languages?

My question is pretty basic, I'm looking for a named method if you know one, but also proper terminology, further reading, and anything this reminds you of if you don't. (I'm new to this, don't have the right terminology and just need a starting point so I can help myself.)

I'm trying to interpret the vector inputs to a black-box controller (which I can model as finite-state machine). I can see them and they look like a series of symbols but it is too variable (stochastic) to easily define an "alphabet" based on repetition and it isn't clear how the symbols are grouped. In other words it isn't clear whether they use something like block coding where each symbol is the same number of vectors in a sequence, or convolutional coding where symbols can have different numbers of vectors.

The controller operates a linear actuator (it just goes up and down) and the inputs are large vectors from a CNN. It's essentially a pong playing robot. I make predictions by modeling the controller as binary decision tree that maps each putative symbol to an exact position of the actuator. This is very similar to a language induction problem for a finite-state machine. Recall that a finite automaton can be a representation of a regular language. Also recall that finite automaton can characterized in terms of its memory requirements and computational complexity, hence a regular language can too. 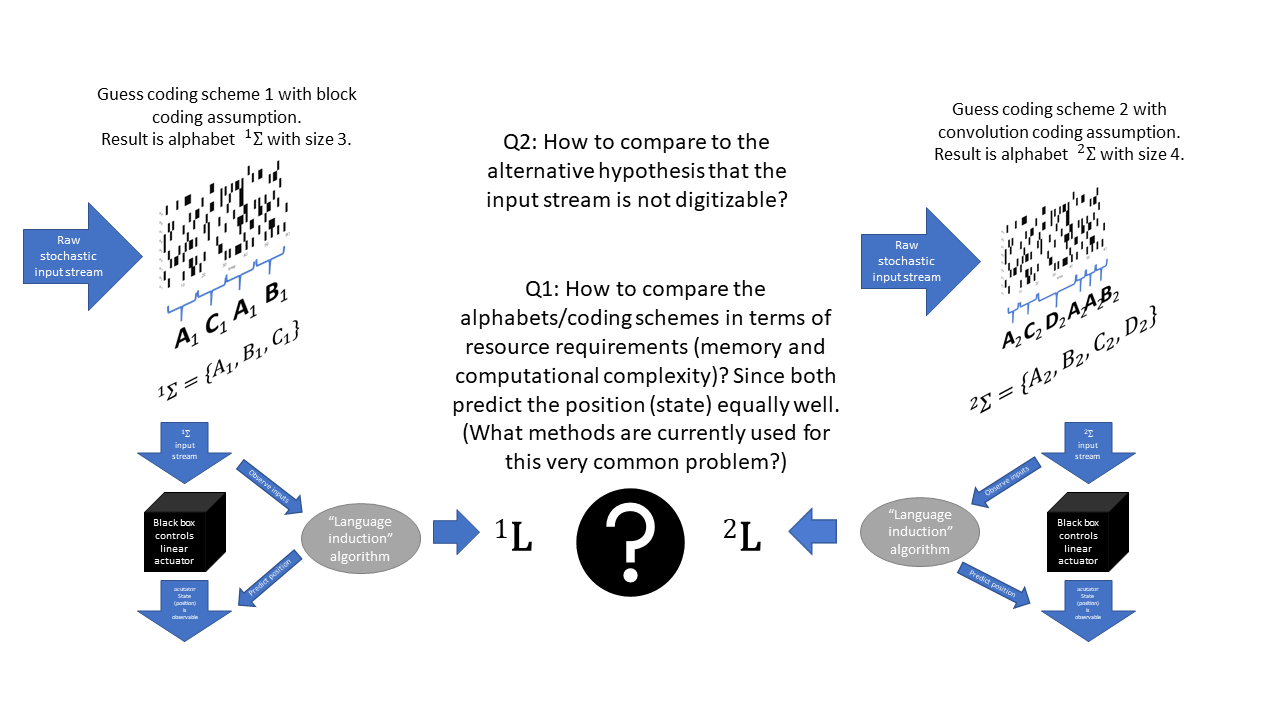 If you don't think I've given enough information keep in mind that I don't expect a detailed answer (but I'm happy to offer more). An acceptable answer is something of the form "I think you need to look into ____.", "This sounds like ____ in which case we often use ____.", "This sounds like a paper I read, see ____.", or "The ____ metric compares the level of the difficulty of a task to the number of symbols in the language required to perform that task and tells you how efficient a language is at that task."

The answer was just tree depth. What I needed to do was learn about evaluating the complexity of finite automata and how we can use a decision-tree model (decision-tree complexity) to put bounds on the complexity of an automata (analysis of algorithms). So I take my two coding schemes (call them A and B) and I make binary decision tree to predict the output of my system based on the inputs provided by the coding schemes. If both coding schemes A and B are equally useful for predicting the outputs but A requires a tree depth of 15 while B requires a tree depth of 54 then A is "better". This is because our decision-tree model of the system is simpler when using A than when using B and as stated before we strongly believe that our system is as simple as possible.

Of course I also need to include the complexity of the coding scheme itself but that just goes with alphabet size since it is a Nearest Neighbor search.

So it was under my nose, I just needed some context.

Not the answer you're looking for? Browse other questions tagged formal-languages terminology efficiency coding-theory encoding-scheme or ask your own question.