Polynomial bound on sum of strings

I am struggling with the following problem:

Your friend announces "at least the problem is in $\mathcal{NP}$, since I would just have to exhibit such a string $u$ in order to prove the answer is yes." You point out that this an inadequate explanation. How do we know the shortest string $u$ doesn't have length exponential in the size of the input?

Prove the following: If there is a string $u$ that is a concatenation over both $A$ and $B$, then there is such a string whose length is bounded by a polynomial in the sum of the lengths of the strings in $A\cup B$.

Now, I have actually found a solution and the solution claims that the maximum length of $u$ is at most $n^2L^2$ where we assume $m \leq n$ and $L$ denotes the maximum length of any string in $A \cup B$. The solution then goes on to exhibit a proof by contradiction using the pigeonhole principle to show that if we assume $u$ has length greater than $n^2L^2$ we arrive at a contradiction.

My question is where does the bound $n^2L^2$ come from? I know that $n$ is the number of strings in set $B$ and $L$ is the max length string in $A \cup B$. But I feel as if the largest possible concatenation over both would be more like $2nL$ since we would need to include every string in both $A$ and $B$ and the longest string in either is $L$ and there are at most $n$ strings in each. What am I missing? I think I can handle the remainder of the proof once I understand where the $n^2L^2$ bound is coming from.

As before, we can construct DFAs for $L_A,L_B$ having roughly $\|A\|,\|B|$ states, respectively. Using the product construction, we get a DFA of size roughly $\|A\|\cdot\|B\|$ for the intersection. It is well-known (and can be proved using the pigeonhole principle) that if a DFA having $N$ states accepts any word, then it accepts some word of size less than $N$. This implies your claim.

It's less clear what is the correct dependence on $n$.

I think the intuition is something like this (warning, not very rigorous): 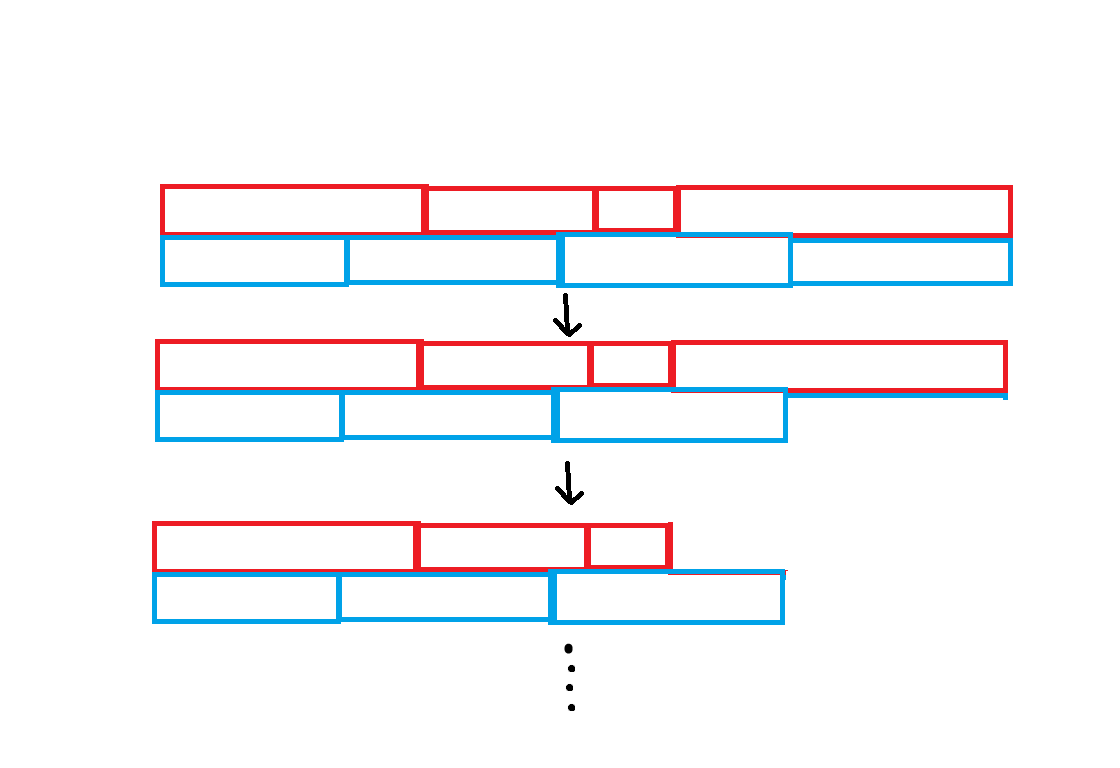 Now, we keep breaking stuff off, until we get an endpoint that we have seen before.

So we know that if we keep breaking off bits, we will eventually encounter an endpoint that we have seen before. Then we can shorten the original string $u$, by cutting out the portion between the 2 occurrences of the same endpoint. We keep repeating this until $u$ is as short as possible, which would happen once $u$ has no more 'repeated endpoints'.

What is the length of $u$ now? $u$ contains all most $n^2 L$ endpoints, and each endpoint is at most $L$ characters between them (because the endpoints are separated by at most one or two blocks), that is a total length of $n^2 L^2$.

Could you also post a link to the proof so we can take a look!

Not the answer you're looking for? Browse other questions tagged complexity-theory discrete-mathematics or ask your own question.

5
Minimal positive difference of a mulitset of real numbers
7
Finite representations and programming languages Countably inifite
9
What are appropriate isomorphisms between formal languages?
3
Complexity of self-reducible set
2
Is computing the cardinality of sum of regular expressions without kleene star closure EXPTIME problem?
3
Connecting strings in a graph is a PSPACE problem
2
Proving set of finite languages vs all languages over finite alphabet to be countable / uncountable
0
Is there a way to map the concatenation operation over strings to the addition operation over $\mathbb{N}$
1
Why are all regular languages in P?