I'm solving a problem of detecting an optic disc in a retina image. As you can see from the image: 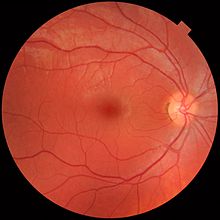 the optic disc is the epicentrum of the blood vessels, has an irregular circular shape and has a brighter color than the rest of the retina.

Now I want to use a convolutional neural network to detect it. I know that typical approaches to detecting something in an image using CNNs (consisting mostly of conv., pooling, dropout and fully connected layers) devide an image into smaller parts, each of them is send to a classifier asking whether there is the object or not.

But I'm thinking about another approach. It'd be a model, which gets a normal RGB image of Height x Width size as input, which goes through several convolution layers so as the size remains the same (Height x Width) but with more channels let's say N. There would be no pooling layers(??), so the final output of the convolution would be of the size Height x Width x N.

In this output there'd be Height x Width feature vectors of the size N, each somehow describing the pixel on this position in the original image and its neighbourhood (??). Now what I'm trying to do here is to take these individual vectors as inputs to a fully connected layer network. Output of this would be some number describing the relative position of the input pixel in respect to the position of the optic disc in the image (maybe its distance, or the position itself, I don't know yet...). The training data consists of an image and the x, y position ot the optic disc.

But I'm not sure about some things about this approach. Can I not to use pooling layers? I thought maybe it wouldn't be transform invariant then, or something like that. I'm also not sure if what I'm doing in the fully connected layers is correct. I don't understand neural networks so well to say that "it is obvious that this should work" or "or this is that case where it is not easy to say and it's worth implementing it to see how it will work" or "this obviously won't work because...". So my question is just: which one of this three cases is this?

And isn't there some "obvious" method for this stuff and I'm just trying to solve something that was already solved? (maybe RNNs or something...)

Browse other questions tagged machine-learning neural-networks computer-vision or ask your own question.

8
What can be learned from the weights in a neural network?
2
How to reconstruct the image from a neural network output?
3
What restrictions apply to query and target vector encoding on fast-forward neural networks?
3
Convolutional Neural Network Feature Engineering?
2
Change in Training Accuracy
2
Extracting intersecting objects of the same colour from an image
2
How deep do neural networks need to be?
0
Understanding how convolution of images work in cnn