How to restore a broken minimal spanning tree?

I'm really not sure if I'm in the right direction but this is what I thought of:

Now we have 2 connected components:

Clearly $e^*\notin S$ and $e^* \notin V\setminus S$. Also $S\neq V$ because otherwise we'd get a connected graph after the removal of $e^*$ of $n-1$ edges which would mean that there were $n$ edges in $T$ which is a contradiction since $T$ is a tree.

I'm having trouble with running times.

c) This could also be $O(|E|)$ because in the worst case the graph could be something like this: 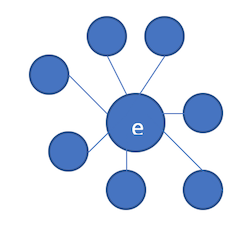 This is just to confirm that OP has, in the course of updating his question, arrived at a well-written correct "algorithm which will run in $O(|E|)$ time and will restore $T$ such that it will yield an MST $T'$ for $G'$".

Not the answer you're looking for? Browse other questions tagged algorithms graphs weighted-graphs minimum-spanning-tree or ask your own question.