Some questions regarding an approximation algorithm for Cardinality Maximum Cut Problem in Vazirani's textbook!

2.1 Given a n undirected graph G=(V,E), the cardinality maximum cut problem asks for a partition of V into sets S and G\S so that the number of edges running between these sets is maximized. Consider the following greedy algorithm for this problem. Here $v_1$ and $v_2$ are arbitrary vertices in G, and for $A \subset V$, $d(v,A)$ denotes the number of edges running between vertex v and set A. 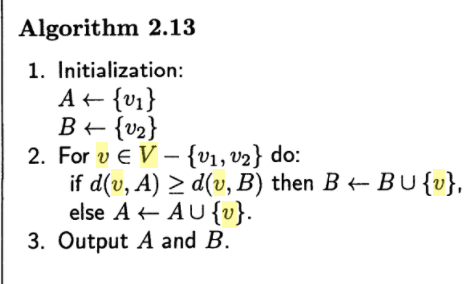 Show that this is a factor 1/2 approximation algorithm and give a tight example. What is the upper bound on OPT that you are using? Give examples of graphs for which this upper bound is as bad as twice OPT.

I'm here not to ask for solving problem, instead I just want to understand what the question wants exactly and different between some parts of this question.

A tight instance for such an algorithm is an instance $x$ such that $V(A(x)) = \alpha OPT(x)$. This instance shows that $A$ isn't a $\beta$-approximation algorithm for any $\beta < \alpha$.

You are also wondering what is the correct answer to the question about which upper bound you are using. Your algorithm presumably uses the trivial upper bound, which is the total number of edges. If you find an "integrality gap" instance in which the ratio between this upper bound and the maximum cut is $\alpha$, then this means that any algorithm using this upper bound cannot have an approximation ratio better than $\alpha$. In your case you can take a large clique, for example (this is actually a sequence of bad instances).

The famous Goemans–Williamson algorithm uses a better upper bound, namely the value of a semidefinite relaxation of maximum cut. Using this better upper bound, it manages to increase the approximation ratio from 1/2 to roughly 0.878, which is conjectured to be optimal.

Not the answer you're looking for? Browse other questions tagged approximation or ask your own question.