Construct an equivalent NFA for the given regular grammar

For this regular grammar, create an equivalent NFA.

So our NFA is made up of 2 states, A and B. The initial state is A and it's also the ending state because the rule says we have the empty word ε in the state A. If we read an a from state A, we go to the state B. But I don't know what that single a means in the first rule?

From state B, if we read a b, we go to state A. But again, what does this single b mean in this rule?

All in all I would construct the NFA for the regular grammar G like that:

The single $a$ indicates that if we are in state $A$, and read $a$, we must go to an ending state, same with single $b$. If we follow that, we get this automaton : 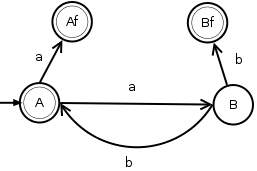 If we were less prudent, we would argue that if we can generate an $a$ with variable $A$ and stop, and because $A$ is an ending state, then we can put a loop on state $A$ labeled with $a$, like this : 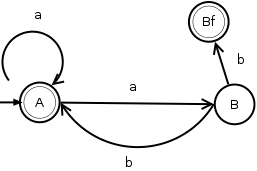 But this automaton doesn't match with grammar $G$. This one recognize strings of the form $a^i$, but grammar $G$ can't generate them.

But something that can be done to lighten our automaton would be to remove state $B_f$, and count on our ending state $A$ to handle the case where we end generation with a single $b$, like the following : 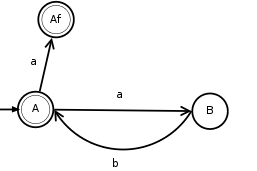 EDIT : As @rici said, if we apply subset construction to the last automaton, we get this one : (without dead states)

So this is an automaton that matches with $G$.

Not the answer you're looking for? Browse other questions tagged formal-languages regular-languages automata finite-automata formal-grammars or ask your own question.

1
Why the given NFA is not possible
2
Thompson's construction, transforming a regular expression into an equivalent NFA
1
Show that kleene plus language is a regular language by describing how you build a DFA or NFA for it
2
Show that if L is regular, then third(L) is also regular. Hint: Construct an ϵ-NFA from the DFA for L
0
Why LL(1) grammar generate all regular languages?
0
Equivalent regular grammar with minimum number of nonterminals