Dependency graph with general (AND/OR) dependencies

This is similar to Is there such a thing as an "or" case in a dependency graph?

I am trying to represent a dependency graph where the dependencies for an individual node may be a general boolean function of other nodes.

For example, node A may be reachable from node B or node C.

I can't see how to represent this with a DAG. Is there way to represent general boolean dependencies in a DAG? If there isn't, what other sort of structure should I use?

Sorry for the crappy mspaint, but you could make an intermediate layer where the nodes in the middle represent each of the combinations of (A,B), like in a truth table: 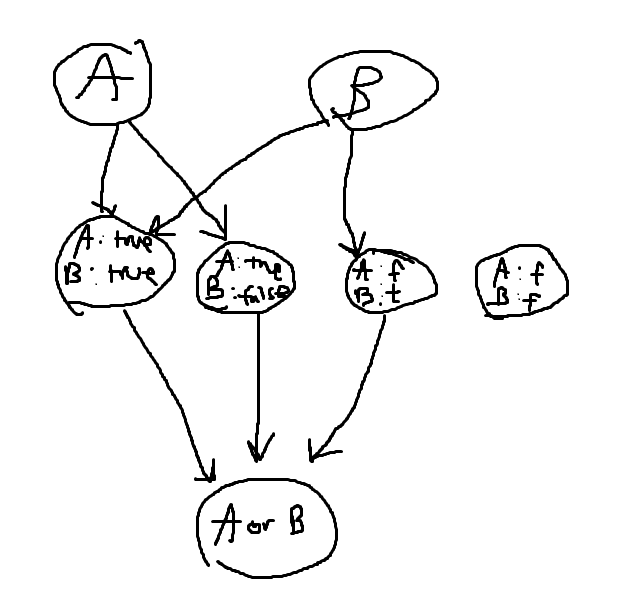 In the case of the PDAG, the up triangle represents AND, the down triangle OR, and the diamond represents NOT. The PDAG seems to be the closest to an AND/OR dependency graph, with the topmost element only having it's requirements satisfied if the function would yield a 1. 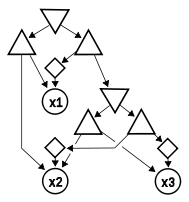 5
Is there such a thing as an “or” case in a dependency graph?

0
Generating cyclical dependency graphs from k-way partitions of DAGs representing boolean networks
3
What equivalence relation does this algorithm produce for an cyclic directed graph with labeled edges?
1
Shortest path in a graph where edges are forbidden depending on the path taken
1
Generating project network graph
0
How to build tree from graph with specific property
2
Does topological sort exist for any complete directed acyclic graph?
2
Is it assumed that lower bounds on the size of monotone circuits apply to general Boolean circuits too?