How to prove that a custom iterative algorithm will determine all shortest paths to a graph node?

I'm not sure what the following algorithm does but it seems that it calculates the shortest paths from a node $t$.

The algorithm is as follows:

Outer loop which is repeated continually

$\quad$ Inner loop: we scan all edges in lexicographical order and for every $e=(u,v)\in E$ we $\quad$ do the following:

$\quad$ if no updates were performed in the inner loop the algorithm exits.

I need to prove by induction what the algorithm does. For example for the following graph below and if $s=b$ the initialization of $A$ will be as follows: 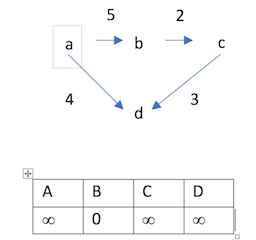 Then the first run of the inner loop would be:

The next time the inner loop will not make any updates because all the reachable nodes were already updated.

I'm not really sure if I understood correctly what the algorithm does and how to prove this inductively.

How does the fact that the algorithm checks nodes in lexicographical order come into play?

You can prove by induction that for every iteration $i$, the array $A$ during this iteration, $A_i$, contains the weights of some paths originating at $t$. More formally, for all $v\in V$, $A_i[v]$ is either $\infty$ or the weight of some path from $t$ to $v$.

Now, it is easy to show that the values of $A_i$ are monotonically non increasing, which combined with the above statement implies that the algorithm terminates. I leave the details to you.

5
Prove that for a general data structure - operations Extract_min() and Insert(x) cost $\Omega(\log n)$?
8
Shortest path that passes through specific node(s)
1
How to prove that for a full binary tree $T$ there's a series of frequencies such that Huffman alg. will produce $T$?
0
how to prove correctness of this BFS algorithm?
1
Determine whether there exists a path in a directed acyclic graph that reaches all nodes without revisiting a node
0
Shortest path form node X to nodes A, B, C in graph
0
algorithm to find shortest path connecting EVERY node
0
How to prove that Bellman-Ford algorithm detects a negative cycle?
1
How does node expansion work in a graph for AI search?