Algorithm for finding two vectors that span a plane

My problem is as follows. I am working on an experiment where I need to align a 3D vector with spherical coordinates $\vec{v} = (r, \phi, \theta)$ (red) to an infinite 1D line (blue). That line lies, at some unknown angle $\xi$, in an infinite 2D plane, with unknown vector span (green). 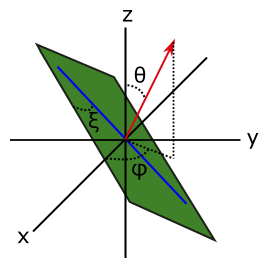 My idea is therefore as follows: in spherical coordinates I algorithmically control $\phi$ and $\theta$ while monitoring $S_P$, to find two vectors that span the plane. I use these two vectors to set up a new polar coordinate system of that plane, in which I can then sweep the polar angle to find $\xi$ and maximize $S_L$.

The second part should be trivial, but the first part is what my question is about. How do I algorithmically find two vectors that span the plane, controlling $\phi$ and $\theta$ and monitoring $S_P$?

As it currently stands I can find a single vector that works by simply varying $\phi$ and $\theta$ until $S_P$ reaches a maximum in both parameters simultaneously, but how do I go from there to find a linearly independent vector that is also in the plane? How should I algorithmically 'walk' through $\phi,\theta$ space to find that other vector? I say walk because what I envision the method to be like is that I start from the local maximum, 'overrotate' in $\theta$, bring $S_P$ back up with $\phi$ and overrotate, that one a bit, and then go back to theta and repeat. That will walk me through the angle space, but how I use this to find the second vector I don't see.

Browse other questions tagged algorithms computational-geometry or ask your own question.