Are all relational schemas with partial dependencies not in 3NF?

Let R be a relation schema, F be the set of functional dependencies (FDs) given to hold over R , X be a subset of the attributes of R, and A be an attribute of R. R is in third normal form if, for every FD X -> A in F, one of the following statements is true: 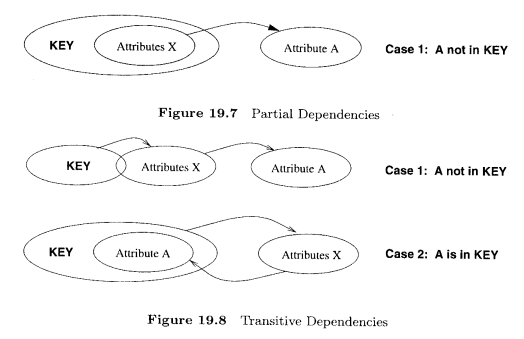 • X is a proper subset of some key K. Such a dependency is called a partial dependency.

• X is not a proper subset of any key. Such a dependency is called a transitive dependency, because it means we have a chain of dependencies K->X-> A.

You have given one correct definition of 3NF a few lines above, and according to this definition the two cases are true only if A is not a prime attribute (that is, is not part of a key), otherwise the dependency does not violate the 3NF.

So the answer to the question which is title of your post: “Are all relational schemas with partial dependencies not in 3NF?” is NO.

Yes, if you mean that in these cases the dependencies do not violate the 3NF.

Yes, both cases could exists: in general in a relation scheme there can be multiple candidate keys (and possibly with empty intersection).

Am I correct that

If that case can exist, it will be 3NF.

If that case can't exist, all relational schemas with partial dependencies are not in 3NF?

0
Does 1NF require that there can be no duplicate rows?
-1
Does 2NF require 1NF?

3
When is relation in 3NF but not in BCNF?
0
Transitive dependency in 3NF
0
Is relation following given characteristic already in 2NF, 3NF and BCNF?
1
Is my decomposition of R into 3NF is lossless and preserving all dependencies?
0
Relation is in 2NF or not?
0
Figuring out the equivalence between two definitions of "transitive functional dependencies" and intuition behind the intended meaning of definition