Where are 'Base & Bounds' registers located?

I read about virtual memory from L08/CS152 of U.C Berkeley and used to deep dive into the details of VM hardware implementation, yet didn't find any document or figure on the course specifying where the 4 ‚ÄúBase & Bounds‚Äú registers (Data Bound Register, Data Base Register, Program Bound Register, Program Bound Register) used in the figure below are located. In order to have more detailed information, I did many searches for ‚ÄúMMU architecture‚Äù, ‚ÄúX86 architecture‚Äù, ‚Äúbound register', ‚Äúbase register‚Äù, and so on .. But without success. 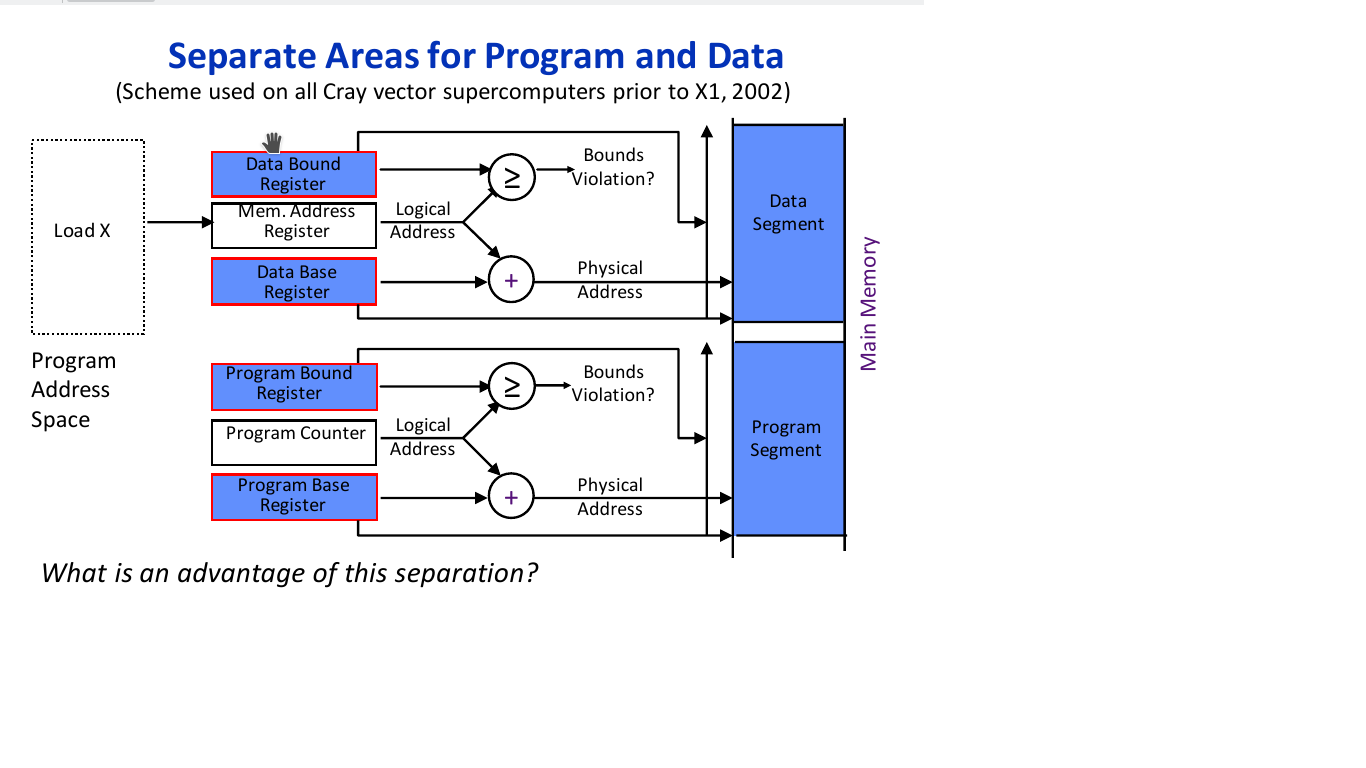 Are B&B registers located on the MMU or on the CPU? Can anyone provide any related hardware architecture reference?

The values for base and limit must be stored in registers somewhere; it would be highly inefficient to read these from memory on every memory access.

The distinction between "CPU" and "MMU" isn't really an important one on the old Cray vector architectures, and also isn't really important today. This is more about older microprocessors where a "processor" lived on more than one die (e.g. the 68000 architecture which had an external MMU). Today, address translation is closely tied to the rest of the CPU. This actually made the news this week, since Meltdown uses the interaction between the MMU and instruction speculation as a side-channel attack against some Intel CPUs. But I digress.

The diagram is talking about Cray vector computers, so probably the best reference is to look at an old Cray manual.

So here is the Cray Y-MP EL (i.e. the "entry level" model) functional description document, and the description of the exchange mechanism in particular:

Address Base and Limit Fields

Four registers in the exchange package define a program's data range and instruction range anywhere in memory and allocate specific amounts of memory to each range. This memory allocation technique has two benefits. First, all programs are relocatable. When a program is written, the programmer does not need to know where in memory the instruction and data fields will be located. Second, each program can have its memory access restricted to certain parts of memory. A program can be halted if it tries to run an instruction outside of its allowed instruction range or if it tries to read or write data outside of its allowed data range. This is especially important where more than one program occupies memory at the same time; programs can be prevented from executing instructions or operating on data that belongs to other programs. The four registers are described in the following list.

Altering these registers is typically a privileged operation, in that it is reserved for supervisor-level code rather than user-level code. On Cray machines, these registers were set with an "exchange package", which is more or less the equivalent of a process control block, so it was presumably an operating system routine that set the registers when a task was run.

Now let's take a quick look at a modern architecture.

For Intel x86, this is called memory segmentation. The base and limit registers aren't accessed like normal registers, but are stored in a special data structure called a segment descriptor, which is loaded with the LGDT or LLDT instruction. The difference between the two is that the x86 architecture supports two descriptor tables: "global" and "local". Each process can have its own local table, which is used for features such as thread-local storage.

The situation changed completely with the advent of 64 bit CPUs. In 64-bit mode, segment descriptors are, for the most part, no longer used. There are two segment selectors, FS and GS, which support loading a base field using the model-specific register mechanism, as well as a special instruction called SWAPGS, the details of which are only important for operating system implementors. Note that these selectors have no limit field. Protecting memory from unauthorised access is handled using the paging mechanism, not segmentation limits.

This brings the Intel architecture in line with most other modern CPUs, such as ARM, which do not support memory segmentation.

Not the answer you're looking for? Browse other questions tagged computer-architecture memory-management virtual-memory or ask your own question.

0
Size of address registers and data registers in relation with memory size
2
Why does x86 has explicit register definitions, and RISC's doesn't?
11
Data General MV/8000 virtues of "No mode bit"
2
What are logical addresses and where do they actually reside?
5
What are "state registers" and "code registers"?
1
If the MOVE instruction in a Transport Triggered Architecture can implement a NAND gate (as a Functional Unit)
0
Storage in registers
1
How are instructions from software sent to digital circuit in cpu?